This eggnog French toast bake is made with crusty bread, eggnog, warming spices, and bourbon, and can be prepared the night before for an easy overnight breakfast bake!

Is it time for eggnog yet?

It’s only October, but the grocery store shelves are already fully stocked with this thick, creamy drink.

And my eggnog-loving husband has already purchased two cartons of eggnog. He didn’t mind its early appearance.

When I saw the eggnog sitting inside my fridge, I remembered something.

This recipe is an updated version of an eggnog French toast recipe that appeared on Champagne Tastes back in 2016. The original version was a little more complicated, had quite a few more ingredients, and (frankly) I prefer this simplified version.

This eggnog French toast bake is made with bread soaked in an easy, spiced eggnog custard, and then baked until golden.

I like to use either a French baguette or an Italian loaf.

A French baguette will soak up less of the custard, and flavorful custard will form along the bottom of the casserole dish.

An Italian loaf will soak up most of the custard, so the final consistency will be different, but still delicious.

I can’t decide which type of bread I prefer, and either will work perfectly in this recipe.

Whichever type you use, keep in mind that stale bread is the best bread for French toast.

Should I Use Store-Bought or Homemade Eggnog?

I used to make French toast with homemade eggnog, but recently I’ve been trying to make things simpler.

This recipe works perfectly with store-bought eggnog. Just make sure you like the flavor of the eggnog you’re buying.

That said, if you want to try making homemade eggnog for this recipe, go for it!

If you’ve got leftover eggnog, try making this eggnog latte next!

You can prepare it ahead of time, there’s zero rushing, and both the flavor and texture are perfect.

As much as I love fried French toast, when using eggnog I definitely prefer to bake the bread, not fry it.

The thick eggnog mixture tends to cling to the crust, and I think it cooks more evenly when baked.

Start by slicing the bread into 1″ pieces.

You want stale bread so that it will absorb a lot of liquid. If your bread isn’t stale, you’ll need to toast it in the oven before starting.

Whisk together some eggnog, milk, brown sugar, bourbon, and cinnamon.

One by one, dip the bread slices into the eggnog mixture. Arrange the slices in a casserole dish.

Next, pour the remaining eggnog custard over the bread.

Cover the pan, slide it into the fridge, and refrigerate the bread for at least an hour or overnight.

When you’re ready to bake the eggnog French toast, dot the top with some cubes of butter.

Slide the French toast into the oven and bake until golden.

I like to serve eggnog French toast with fresh fruit (like sliced plums) and a little honey. Enjoy your breakfast along with a French press cappuccino or a mug of herbal tea. 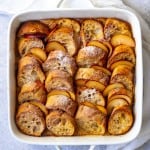 Nutrition information does not include optional fruit or syrup.