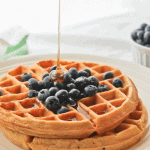 These easy-to-prepare Belgian coconut waffles are dairy-free, and use coconut milk, shredded coconut, and coconut oil! Try these light and crispy waffles for your next breakfast or brunch!

Do you have favorite breakfast for lazy mornings?

An indulgent, decadent way to start your weekend?

And yet, there’s a special place in my breakfast-loving heart for waffles.

Not just any waffles, mind you!

I want the pinnacle of waffles, the crowning glory of waffledom! I want the fluffy, crisp, and enormous Belgian waffle.

These coconut Belgian waffles are full of the rich, nutty flavor from coconut milk, coconut oil, and of course, shredded coconut.

Best of all, they’re ready in about 30 minutes.

Do I Really Need a Waffle Iron?

Each waffle iron is a little different, so figure out which heat settings you prefer on your particular iron.

Can I Use a Standard Waffle Iron Instead?

Your waffles won’t be quite as large and fluffy, but they’ll be just as delicious.

Do I Really Have to Separate the Eggs?

To make these coconut waffles as fluffy as possible, you’re going to need to separate your eggs.

Yes, it would be easier to plop the whole egg into your batter.

Trust me though, that if you skip separating the egg yolks and whites, the waffles won’t be as fluffy.

And since that’s kind of awful, I separate my eggs!

How to Make Belgian Waffles

Put the egg yolks into a medium mixing bowl with the rest of the wet ingredients, and slowly whisk the wet batter into your already-combined dry ingredients.

Over-mixing creates extra gluten, and your waffles will be too chewy.

Mix until the batter is combined, but still a little lumpy.

The egg whites will go into a separate smaller bowl.

Use a warmed stainless steel or glass bowl (no plastic), and add a few drops of vinegar.

Then, use an electric hand mixer to beat the whites until they’re huge.

The egg whites will double or triple in size, and form stiff peaks.

In other words, when you pull the mixer out and hold the beaters vertically in the air, the egg whites will stand straight up.  If the whites flop over, you aren’t done, keep beating.

Once your egg whites are ready, gently fold them into your waffle batter with a rubber spatula.  Don’t over-mix them.  And that’s it, the batter is ready!

Start pouring the batter into your waffle iron, and soon you’ll be digging into fluffy waffle deliciousness.

Avoid piling finished waffles on top of each other while you’re still cooking your batter.  A pile of waffles means soggy waffles!

Instead, place them in a single layer on a baking sheet in a warm oven to help them stay crisp while you finish making waffles.

Serve your coconut waffles along with some fresh fruit, maple syrup, and a mug of French press cappuccino. 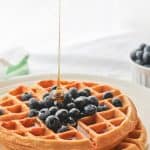