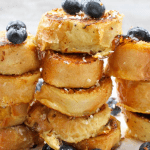 This Coconut French Toast is made with thick, dense bread, crusted with coconut, smothered in fruit, and drizzled with honey.

Guys, I love French Toast.  As in, it’s my favorite breakfast EVER.  I like pancakes, I get excited for waffles or crêpes, but my absolute top lazy-day breakfast choice is– most definitely– French Toast.

I don’t want just any French Toast though.

No, no– I want it to be made with thick, dense bread, crusted with coconut, smothered in fruit, and drizzled with honey.

Just thinking about it makes me ravenous.

If you too crave this sweet, custardy bread, this Coconut French Toast will make you smile.

Did you grow up eating French toast with white sandwich bread?  I did, and it was yummy.  Years later, though, I realized that it was SO MUCH better with a thicker, denser bread.

The bread absorbs more of the custard sauce, and can be warm and soft on the inside, but crisp and golden on the edges.  What kind of bread should you use?

Unofficially, I’m gonna say that you should probably make French Toast with a French baguette.

Your day is pretty much guaranteed to succeed when you use French bread for your French Toast.  Tragically, however, I don’t always have a French baguette in my pantry.

When this happens, and I feel like I just can’t make it through my day without my favorite breakfast, I’ve gotten desperate and used croissants.  (These are also French, so to me this makes total sense.)

What I’ve learned is, you can make your toast out of pretty much any thick, dense bread you want, and it will taste delicious.

Some of the combinations, though, will be ugly.  (I’m looking at you– English Muffin French Toast!)  If you care about how things look, stick with the baguette.  If you’re only interested in taste- use whatever bread you’ve got on hand.

How to Make Coconut French Toast

To make a Coconut French Toast, start by slicing up some stale bread.  The number of slices you need will really depend on the type of bread you’re using.

Next, mix together the milk, eggs, sugar, and vanilla.  Soak your bread until it’s softened, but not falling apart, and then set the pieces onto a hot buttered pan.  Coat the top sides of your bread with coconut, and flip the toast over after about three minutes (or when it’s golden brown).

Cook the toast about three more minutes, and then serve your hot custardy slices of Coconut French Toast with a little more coconut, some honey or syrup, and fresh berries.  Then, start planning your next French Toast Day!

Want some COFFEE or TEA to go with your breakfast?  Try these: 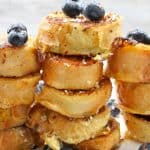