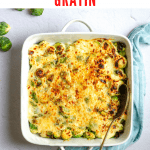 This brussels sprouts gratin with cheese sauce is based on Julia Child’s Choux de Bruxelles à la Mornay, Gratinés, and is a rich vegetable side dish made with homemade béchamel.

Do you ever buy brussels sprouts on the stalk?

I do, and recently I snagged three big stalks of brussels sprouts at Trader Joe’s!

Except guys, three stalks of brussels sprouts is a massive amount of sprouts.

Once I’d removed them from the stalk, there were way more sprouts than I expected. Oops.

Since I over-bought, we now get to eat brussels sprouts every day.

I don’t mind at all because I love this bitter veggie!

We’ve been making this brussels sprout and persimmon salad on repeat lately. You’ve probably seen it if you follow along with my Instagram stories.

This week, though, I wanted something a little richer. I wanted comfort food.

This recipe, like many of Julia’s recipes, might seem complicated at first, but each step is fairly simple. I recommend reading the recipe in full before beginning.

This recipe is based on Julia Child’s Choux de Bruxelles à la Mornay, Gratinés (brussels sprouts gratin with cheese sauce) from her book Mastering the Art of French Cooking, Volume I.

If you want to try Julia’s version from her book, keep in mind that you’ll need to visit, not one, but four recipes in her book, as the main recipe references three other recipes.

I’ve put everything in one place for you.

I did make a few small adaptions to Julia’s recipe (for simplicity).

Should I Blanch the Brussels Sprouts Before Roasting?

You can, but you don’t have to.

Julia recommends it, but I prefer to skip this step.

I think they pick up more sweet notes in the oven without blanching. That said, blanching will make your sprouts a little more tender.

Do whichever you prefer.

Do I Have to Remove the Outer Leaves of the Brussels Sprouts?

If any leaves appear damaged or dirty, then yes of course, remove them. Otherwise, I simply remove the tough stem area and halve or quarter the sprouts.

Should I Roast the Brussels Sprouts in Oil or Butter?

Julia calls for roasting the sprouts in melted butter.

As a (slightly) quicker alternative, I prefer to use olive oil. It saves a little time and there is still plenty of butter in this recipe.

How to Roast the Brussels Sprouts

Start with your prepared sprouts, and then toss them in oil or butter and a little sea salt.

How to Make the Béchamel Sauce

This sauce is actually pretty simple. If you’ve ever made lasagna from scratch (like this butternut squash lasagna) or mac and cheese from scratch, you’ve done something similar already!

Melt butter over low heat, and then begin stirring or whisking in some flour. If you’re avoiding gluten, gluten-free all purpose flour (such as Cup 4 Cup) will work perfectly.

Continue stirring until the butter and flour begin to foam.

Next, stir in hot milk.

Bring the milk to a boil, boil for one minute, and then turn off the heat.

Next, stir in some cheese.

You can use Swiss or Parmesan, whichever you prefer or have on hand.

Season the béchamel with salt, cayenne, and nutmeg.

Make sure to taste the sauce at this point and adjust the seasoning. If it seems bland now, it will seem bland after cooking too.

Toss the roasted brussels sprouts in half the sauce, and then pour the rest of the sauce over the sprouts.

Top the entire dish with more cheese. Dot with butter.

Slide the casserole dish under your oven’s broiler and cook until the cheese is bubbly and golden.

Serve right away, along with some crusty bread and a glass of crisp white wine. 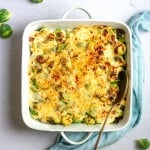 Partially Make Ahead:  This dish tastes best right after cooking, but can be partially prepped ahead. For more tender brussels sprouts: Blanch in boiling water for 6-8 minutes before roasting.  Béchamel troubleshooting: