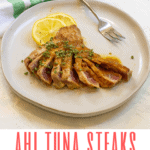 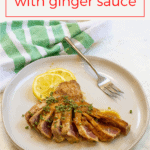 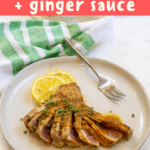 These easy seared ahi tuna steaks are seasoned with sesame seeds and a ginger soy sauce marinade. This extra-quick main course is ready in 20 minutes!

I just wrote a love poem to my tuna. Want to hear it?

Ahi Tuna, how do I love thee?  Let me count the ways.  I love thy flavor and freshness and–

Seriously, though, ahi tuna is FANTASTIC.

It also tends to be on the pricey side at restaurants, which is tragic, because I want to eat it ALL. THE. TIME.

The solution to my (and your) tuna-budget woes is to cook it at home.

These seared ahi tuna steaks are simple to make, and are so delicious that you’ll giggle with happiness.

Should My Tuna Be Bright Red?

Tuna’s signature bright red color actually begins to fade as soon as it’s caught, but some companies spray their tuna with a carbon monoxide gas to enhance the red and make it “prettier.”

In theory, the taste shouldn’t be affected, but I tend to avoid the gassed tuna.

Quick Tip: Some very high-end ahi tuna is frozen so quickly and at such low temperatures that it will actually turn red again when thawed.  BUT– it’s still not bright red when frozen.

Where Should I Buy Ahi Tuna?

Try the grocery store nearest you that has the best quality seafood.

I usually buy my tuna steaks at Trader Joe’s or my local health food store.

Should My Tuna Be Served Rare?

This is totally a matter of personal preference.

In my opinion, quickly seared rare (or medium rare) tuna steaks have the most flavor.

However, if you prefer to cook your ahi tuna steaks a little longer, go right ahead.

Should I Buy “Sushi Grade” Tuna?

You can if you want to!

BUT– when you’re fish shopping in the seafood freezer aisle, be aware– the “sushi grade” label on tuna isn’t regulated by the FDA.

To make these easy seared ahi tuna steaks, start by pouring the easy blended marinade over the tuna.

Leave it alone for about 10 minutes.

Make sure not to throw out the marinade when you cook the steaks– you’ll use it later.

Sprinkle sesame seeds on the tuna (on either both sides or just one side– it’s totally up to you).

Heat oil on high in a heavy bottom pan (I use a 12″ cast iron skillet), and when it’s very hot and smoking, sear the tuna about 30 – 45 seconds per side. Then remove it from the pan.

Next, you’re going to make a pan sauce.

Lower the heat to medium, and pour the marinade into the pan along with the lemon juice.

Serve your tuna with the pan sauce and this Japanese-inspired mushroom salad.

Dig in, enjoy, and don’t even bother trying to contain your food-happiness.

If you love the sauce on these tuna steaks, check out these recipes served with similar sauces: teriyaki salmon and teriyaki sablefish. 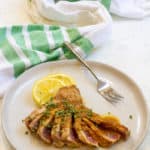 Recipe Variations: For gluten-free preparation: Use gluten-free certified tamari or coconut aminos instead of soy sauce.