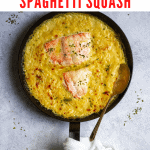 This salmon spaghetti squash bake is a tasty seafood casserole (or gratin) made with squash, milk, Parmesan cheese, and salmon. Prepare it ahead of time for a quick dinner!

How do you feel about spaghetti squash?

Do you love it?

We’ve been eating lots of spaghetti squash this month, and I’ve been enjoying every bite!

If you’ve been following along with my Instagram stories, you’ve probably seen some spaghetti squash.

But guys, spaghetti squash can be a little tricky to cook with. Much like zucchini, this squash holds onto a lot of moisture and has an very mild flavor.

I decided to try adapting this summery zucchini gratin into a winter squash recipe, and (after a few tries) we fell in love with this fabulous fall meal.

Happily, we also had lots of fish on hand, and this quickly turned into a salmon spaghetti squash bake.

How Do I Cook Spaghetti Squash?

For this recipe, you only need half of a spaghetti squash, and you can cook it however you prefer.

I recommend cooking the entire squash, and then storing the remaining squash in the fridge to use later.

I generally roast spaghetti squash, because cooking it in the oven helps the squash develop delicious sweet flavors.

If you prefer, you can also cook your spaghetti squash in the Instant Pot. Either method works perfectly here.

How To Remove Salmon Skin

I really don’t enjoy cutting the skin off salmon, but for this recipe it’s a good idea.

The skin is edible, but it won’t be crisp after cooking. I recommend removing the skin before cooking, otherwise it will end up in the casserole.

To remove the skin, place the salmon skin-side up on a cutting board. Use a sharp knife (such as a fillet knife) and cut parallel to the fish’s natural grain.

If you have a hard time removing the fish skin cleanly, it’s okay. The spaghetti squash will hide any imperfections.

How to Make a Salmon Spaghetti Squash Bake

Start by cooking the squash in a large, oven-safe pan. I used this Lodge 12″ carbon steel skillet.

Next, add a little flour. Gluten-free all purpose flour (such as Cup 4 Cup) will work perfectly.

Stir the squash until the flour is absorbed.

Slowly pour in a cup of milk.

Bring the liquid to a simmer, and cook for a few minutes until the milk begins to thicken.

Stir in some Parmesan.

Next, make an indention in the squash.

Place the salmon into the pan.

Sprinkle more Parmesan over the entire dish and drizzle a little olive oil on top.

Bake the salmon until the fish is opaque and tender.

Finally, switch on the oven’s broiler until the cheese begins to turn golden.

Serve this salmon spaghetti squash bake right away, along with a piece of toasted bread and a crisp glass of dry hard cider. 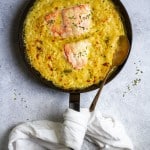