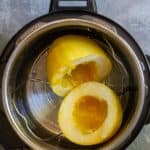 Cooking it can be SO SLOW!

And honestly, sometimes that’s fine. Sometimes I enjoy slowly roasting winter squash in the oven, and letting the edges of the squash caramelize and become even more delicious.

But other times– other times I simply need to get dinner on the table.

This Instant Pot spaghetti squash has become a dinner staple in my home.

It’s a vegetable and faux-pasta all wrapped up into one, it’s on the table in less than 30 minutes, and we love it.

No Instant Pot yet? Make roasted spaghetti squash in the oven!

Can I Cook the Spaghetti Squash Whole in the Instant Pot?

I do not recommend it.

I’ve seen a lot of recipe sites that recommend leaving the spaghetti squash whole, piercing it with a knife, and cooking it for about 15 minutes with a natural release.

I’ve found that leaving the spaghetti squash whole is not a reliable cooking method, and definitely recommend cutting it in half before cooking in the Instant Pot.

Plus, in my opinion, it’s a lot harder to scoop out the seeds and membrane after the spaghetti squash is cooked.

How to Cut Spaghetti Squash

Since I’m telling you to cut the squash in half, here’s how to do it.

Lay the squash on a cutting board, and insert the tip of a large chef’s knife into the squash.

Rock the knife back and forth to wiggle it into the squash, and then cut downward through half the squash. Turn the squash and cut it all the way in half.

I prefer to cut the squash lengthwise from end to end (because I think the seeds are easier to remove this way), but if you cut the squash across the waist (across the narrow middle) you’ll get longer strands that more closely mimic pasta.

Once you’ve cut the squash in half, scoop out the seeds and membrane.

Does It Matter How Big or Small my Spaghetti Squash is?

This recipe is for an “average-sized” spaghetti squash that weighs about two or three pounds. If you’re using a larger squash, check the recipe card for tips on adjusting the cook time.

I recommend weighing your spaghetti squash on a kitchen scale (either a digital kitchen scale or an old-fashioned kitchen scale like this one). If you don’t own a scale, make sure to weigh your squash at the grocery store.

Don’t have a scale, and also forgot to weigh your squash? If you’re winging it, go by the size.

Start with a halved spaghetti squash, seeds and membrane removed.

Place the metal trivet inside the Instant Pot, and add a cup of water. Set the halved squash on the trivet.

Close the Instant Pot, turn the valve to the sealing position, and press pressure cook (or manual).

Set the timer to 7 minutes.

Some Instant Pots models have a pressure cook button, and others have a manual button.  They do exactly the same thing.

It will take about eight to ten minutes for the Instant Pot to build pressure, and then it’ll start counting down.

When the countdown finishes, your pot will beep.

Use a long-handled spoon to turn the valve from sealing position to venting.

Take the spaghetti squash out of the Instant Pot, remove the trivet, and drain the water from the pot.

Use a fork to scoop the spaghetti strands out of the squash skin.

If you prefer your squash steamed (a little bit wet), go ahead and serve it now!

If you prefer seasoned squash with a drier texture, press the sauté button on the Instant Pot.

Add oil, the squash, and a little salt.

Cook off some of the water, and then scoop out the spaghetti squash.

Serve it warm with fresh herbs and lentil Bolognese, or serve it with this quick and easy marinara sauce from Killing Thyme. 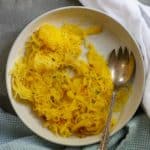