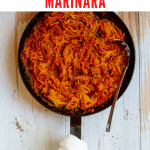 This vegan spaghetti squash marinara is served with a homemade marinara from canned, frozen, or fresh tomatoes. This easy meal is a perfect dinner for fall or winter!

I tasted spaghetti squash for the first time just after graduating college.

My friend Julia was getting her graduate degree in nutrition, and one evening she made us a big bowl of spaghetti squash with pasta sauce.

I’d never seen spaghetti squash before, and was fascinated with the way the strands pulled apart. It really did look (a little bit) like spaghetti.

Years later, spaghetti squash has become a fall and winter staple in my home.

If you’re following along with my Instagram stories, you’ve probably seen me cooking or eating spaghetti squash.

Admittedly though, spaghetti squash with jarred pasta sauce eventually lost its charm. It was healthy, but I no longer found it as satisfying.

Recently, though, that all changed.

I spent most of this past summer making homemade San Marzano marinara sauce and yellow tomato marinara, and when fall arrived I wanted even more marinara.

So, I tossed some spaghetti squash in homemade marinara. It was phenomenal.

This spaghetti squash marinara is an easy low-carb dinner (or side dish!), and is perfect for fall and winter.

How to Cook Spaghetti Squash

For this recipe, you can cook your squash however you prefer.

I generally roast spaghetti squash in the oven, because it helps the squash develop delicious, caramelized flavors.

If you prefer, you can also cook spaghetti squash in the Instant Pot.

Can I Use Canned Tomatoes For the Marinara?

Both canned garden tomatoes and store-bought tomatoes will work perfectly.

What Type of Tomatoes Work Best for Marinara?

The next best option is any other variety of Roma tomato.

How to Make Marinara Sauce

Start by adding oil and diced garlic to a large shallow pan. I used this Lodge 12″ carbon steel skillet.

Heat the oil until the garlic begins to sizzle, and then add the tomatoes and some water.

If you’ve got fresh basil, add a sprig of basil to the top of the tomatoes. Let the basil wilt from the steam, and then gently push it into the tomatoes.

If basil is out of season, stir in some dried oregano instead.

Simmer the tomatoes until most of the liquid has absorbed.

When the spaghetti squash is done cooking and the pasta sauce is thickened, you’re ready.

Scrape the squash out of the peel and into the marinara sauce.

Gently toss the squash into the sauce until combined.

Serve this spaghetti squash marinara along with some freshly grated Parmesan (or vegan Parmesan) and a slice of crusty buttered bread. 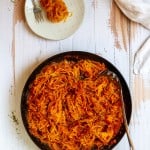 Serves: 2 as a main dish, 4 as a side dish Pan Size: Some readers have reported that their 12″ pans were too small for the volume of sauce. You may find a heavy Dutch oven works best for you, although I’ve always had success with my 12″ carbon steel pan. Halving the Recipe: Smoother Sauce with Fresh Tomatoes:
Canned tomatoes are peeled and will yield a smoother sauce with less texture.  If you’re using fresh tomatoes and want an extra-smooth marinara, you have two options. 1.  Peel the tomatoes first.  Use a knife to mark an X on each tomato, and then blanch them in boiling water until the tomato peel loosens (~15-30 seconds).  Peel, and then proceed with the recipe.  Crush tomatoes with your hands instead of dicing. 2. Blend the sauce.  After cooking, add the sauce to a blender or use an immersion blender to blend the peels into the sauce. Varieties of tomatoes: San Marzano (as well as other Roma or paste-style) tomatoes are less juicy, and result in a thicker sauce.  If using juicy tomatoes instead of Roma, core and seed the tomatoes.  You may want to omit the added water (or add less water), depending on how juicy the tomatoes are.