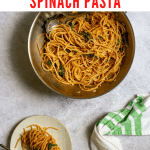 This lemon spinach pasta is made with spaghetti, lemon, and fresh spinach tossed with buttery toasted almonds and breadcrumbs.

Fall is finally here, and it’s time to bring back the dark, leafy greens!

Kale and spinach are back in season, and I couldn’t be happier about it.

There’s also spinach in my fridge, and I plan on making spinach artichoke stuffed mushrooms and spinach mandarin orange salads.

Rainy days need comfort food, like this lemon spinach pasta. This pasta is a rich, comforting meal that comes together quickly.

Can I Use Gluten-Free Pasta?

Just use your favorite gluten-free spaghetti.

Can I Use Frozen or Canned Spinach?

Neither will taste quite as… well, fresh as fresh spinach, but either would work in this recipe.

How to Make Lemon Spinach Pasta

Start by bringing a large pot of salted water to a boil.

While it’s heating up, toast the almonds and breadcrumbs.

Melt butter in a large pan and then add the almond slivers.

Raw almond slivers are best here, because they haven’t been previously toasted.

Cook the almonds for just a couple of minutes until they turn golden.

Scoop the almonds out of the pan and leave the butter behind.

Add breadcrumbs to the butter and cook until they’re golden. Take the breadcrumbs out of the pan.

Next, add a little olive oil and garlic to the pan.

When the garlic begins to sizzle, add the spinach. Drizzle the lemon juice over the spinach and cover the pan.

Cover the pan and let the spinach begin to wilt.

When the pasta is ready, move it straight into the spinach.

Finally, add some lemon zest and the toasted almonds and breadcrumbs.

Serve this pasta with a little Parmesan cheese and a glass of crisp hard cider. 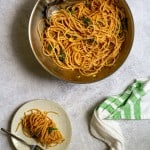