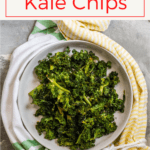 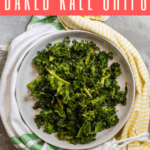 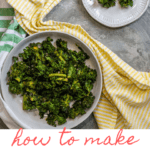 These healthy baked kale chips are quick and easy to make at home, and are a delicious snack food that’s surprisingly hard to stop eating!

I’ve been on a major kale kick lately.

I’ve been freezing raw kale, slow cooking kale and onions (and then freezing that too), and tossing kale in soup (it’s especially good in this white bean and kale soup).

Recently though, my friend Daniella was following along with my kale mania on my Instagram stories. She messaged me to send me her recipe for kale chips, and I’ve been making them obsessively ever since.

Thanks, Daniella, for introducing me to the delicious world of baked kale chips.

Obviously, I can’t speak for EVERY brand of store-bought kale chips, and I’m 100% willing to try again, but I haven’t had great experiences when I bought kale chips in the past.

In fact, I remember them being so unsatisfying that if I hadn’t been stuck at home bored (with massive amounts of kale), I’m not sure I would’ve tried Daniella’s kale recipe.

But guys, they’re SO GOOOOOOD.

Seriously, I cannot stop eating them.

My husband has also been happily devouring batch after batch of kale chips. Yum.

Since then, I’ve played around with other seasonings. Here are my favorites:

Mix and match your favorite seasonings; don’t feel like you need to stick with just one! I particularly like mixing Trader Joe’s Everything But the Bagel seasoning, garlic powder, and Bragg’s nutritional yeast.

Prepare the Kale for Baking: Clean + Dry It

Start by chopping up some kale.

Cut the ribs off the kale (or most of the ribs). You want the leafy part for these chips.

If you don’t have a salad spinner, lay the kale out on a towel and pat it dry.

Make sure to completely dry the kale. Wet kale will make soggy chips.

How to Bake Kale Chips

Next, lay the kale out in a single layer on a baking sheet.

Try not to crowd the kale. If your kale is crowded on the baking sheet, it’ll take longer to get crispy.

Drizzle the kale with oil, sprinkle with salt, and then add your favorite seasoning.

Next, bake the kale in the oven for about twenty minutes, flipping once.

As it cooks, it’ll begin to crisp up.

It’ll also shrink down, and you’ll have a lot less kale than you started with.

The kale chips are ready when the kale feels crisp. If there are a few soggy pieces, slide the tray back into the oven for a few more minutes.

I like to serve my baked kale chips when they’re still warm, and top them off with a little extra nutritional yeast.

Can I Cook These in a Convection Oven?

In fact, if your oven has a convection setting, I highly recommend using it for these kale chips. These chips are crispy with a standard oven, but they are even crispier when cooked in a convection oven.

Plus, they’ll be finished a little bit quicker. Win and win! 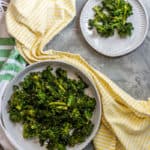 Troubleshooting: My kale chips are soggy.
Make sure to thoroughly dry the kale after rinsing, and avoid overcrowding the kale on the baking sheet.  If your kale is still not crisp, your oven may cook at a slightly lower temperature.  Try increasing the cook time by about 5 minutes. My kale chips are burnt.
Your oven may be cooking at a slightly higher temperature.  Decrease the cook time by about 5 minutes. I didn’t use enough seasoning + my kale chips are bland.
Add more seasoning after baking, and remember next time to add more before baking.  I like adding extra nutritional yeast after baking even when I added enough seasoning from the beginning!
Nutrition information assumes kale chips are seasoned with only oil, salt, and nutritional yeast.