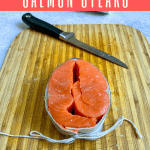 The first time I tried to prepare salmon steaks, I found it a little bit overwhelming.

For one thing, it didn’t occur to me that they would need to be treated differently than a salmon fillet.

News flash — they do.

Salmon steaks (usually) come with the bones intact, and take just a few extra minutes of preparation before cooking.

The good news is, deboning salmon steaks is actually pretty easy and shouldn’t take long to do.

What Is a Fish Steak?

A fish steak is cut perpendicular to the fish’s spine and often includes bones.

The more familiar fillet is cut parallel to the spine to remove the fish meat from the bone.

While a fillet is definitely a more common cut, ahi tuna steaks and swordfish steaks are pretty commonly available at grocery stores.

Salmon steaks, on the other hand, are a little harder to find. So when you find them it’s quite a treat!

Do I Need a Special Knife to Debone Salmon Steaks?

Don’t have either type of knife? Use the sharpest knife you’ve got.

How to Debone a Salmon Steak

Cut the salmon along the inner belly flap to remove the bone and membrane.

Cut along that center membrane as far as the skin (but not through the skin).

When you reach the skin, make a small cut alongside it and then continue down the other belly flap to remove the bones.

Optionally, you could cut through the skin here and divide the steak into two “fillets” if you prefer.

How to Remove Pin Bones from Salmon Steak

Use fish tweezers (or small pliers) to remove the pin bones.

Pin bones are small, pliable bones that will be in the fattier parts of the steak.

Run your fingers along the steak to find any pin bones sticking out, and then gently tug on them to remove.

How to Roll Salmon Steaks into Medallions

If you prefer to cook your salmon steaks unrolled, you’re ready to cook!

I like to leave my steaks as is (unrolled) when pan-searing, because it’s easier to see when the steaks are done cooking.

However, when rolled, the steaks are sturdier and it’s easier to cook them more evenly. It’s a perfect technique for grilling.

To roll the steaks, grab some cooking twine and your boning knife.

Make cuts alongside the skin, halfway up on each side.

Then, fold the belly flaps inward.

Wrap the loose skin back around the belly flaps.

Finally, wrap with twine and tie in a bow or knot!

That’s it: you have a beautiful salmon medallion ready to cook! 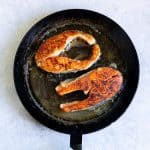 How to Debone Salmon Steaks

Did you buy salmon steaks and aren’t sure how to prepare them? This tutorial will walk you through how to debone salmon steaks and roll them.
Author: Sarah Trenalone
Cook Time15 mins
Total Time15 mins
Course: Meal Prep
Cuisine: American
Diet: Gluten Free
Servings: 1 salmon steak
Calories: 300kcal
Cost: $30 per pound of salmon (price variable)
Prevent your screen from going dark