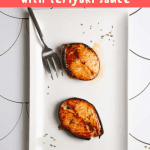 These broiled salmon steaks are marinated in an easy homemade teriyaki sauce, broiled until tender, and finished with a teriyaki glaze.

Have you come across salmon steaks recently and are wondering how best to cook them?

Although salmon steaks are a bit harder to find than fillets, they’re a wonderful treat and well worth seeking out.

There’s a little bit of extra effort involved in preparing the steaks, but it’s not difficult to master! And broiling is an easy way to cook them to perfection.

Want to try a different technique? Here’s a recipe for pan-seared salmon steaks with a lemon and caper pan sauce.

In this recipe, I’m using a flavor that pairs beautifully with salmon: teriyaki. In fact, if you don’t have salmon steaks, you can make a similar recipe with fillets in this teriyaki glazed salmon.

Making homemade teriyaki sauce is simple because it uses a number of pantry staples. I almost always have all the ingredients on hand!

After you whip up the teriyaki sauce, this salmon has a relatively short marinating time and is then ready to go under the broiler, before being finished off with a teriyaki glaze!

How Do I Debone a Salmon Steak?

Salmon steaks often come with bones intact, so you’ll need to take a few minutes to cut along the center membrane on both sides, and slice out the bones. Then use fish tweezers to find and pull out the pin bones.

This tutorial will walk you through exactly how to do it.

I recommend a boning knife, like this Wusthof boning knife. A fillet knife would work in a pinch, or whatever is the sharpest knife you have.

Should I Roll the Salmon Steaks?

You can either roll the steaks into little medallions at this point or leave them unrolled.

They’ll be more sturdy and cook more evenly when rolled, but it’s also harder to tell when they’re done. So make sure to use a digital thermometer if you go that route.

Can I Use Store-Bought Teriyaki Sauce?

I have only tested the recipe with my own homemade sauce.

But of course, you can use whatever teriyaki sauce you like the flavor of!

How to Roll Salmon Steaks

If you’re going to roll the steaks into medallions, you’ll need some cooking twine and a boning knife.

Use the knife to separate the skin from the fish, up to about the halfway point of the steak.

Then tuck the loose flaps of fish in toward the center, making an oblong medallion shape.

Wrap the loose portion of skin back around the “medallion,” and then wrap some twine around the outside and tie it in a bow or knot. Your salmon steak is ready to go!

Want to see more photos and instructions on rolling salmon steaks? The tutorial on how to debone salmon steaks, mentioned above, has all the steps.

How to Make Broiled Salmon Steaks with Teriyaki Sauce

Then place the salmon steaks and the teriyaki sauce in a dish to marinate for 15-30 minutes. Refrigerate them while marinating.

When the salmon is done marinating, brush off any excess sauce and transfer the steaks to an oiled, oven-safe pan.

I use this Lodge 12″ carbon steel skillet.

Save the teriyaki marinade; you’ll need it again in a few minutes!

Slide the pan with the salmon into a pre-heated oven, and broil for 6 to 8 minutes per one-inch of thickness.

The broiled salmon steaks need to reach about 125 degrees Fahrenheit. (This is where you’ll need the meat thermometer if you’ve rolled the steaks.)

While the fish cooks, heat the teriyaki marinade in a small pot over medium heat.

Let it come to a boil, and then simmer for 2 to 3 minutes. It will thicken slightly.

When finished, remove the sauce from the heat and cover to keep warm.

When the salmon is done, remove from the oven and brush the teriyaki sauce over top of it.

Serve the fish immediately, perhaps with side dishes like Boursin mashed potatoes or zucchini rice gratin.

Any remaining teriyaki sauce can be drizzled over side dishes or served on the side! 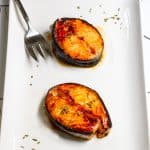 Serving Size Tips: One salmon steak is often enough meat to feed 2 people.  If you’re not concerned about presenting one steak per person, consider sharing a steak.