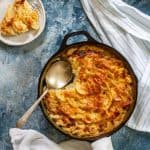 This gluten-free gratin dauphinois recipe is based on Julia Child’s recipe for French scalloped potatoes, and is made with milk and freshly grated cheese.

I know what you’re thinking.

You’re asking yourself, “What in the world is gratin dauphinois?”

Gratin dauphinois is a type of scalloped potato dish, and it’s one of my absolute favorite French side dishes.

This recipe is modified from Julia Child’s version of gratin dauphinois, using her techniques, but with a few extra flavors added.

If you’re looking for other classic French recipes for a special night in, try these: ratatouille, fish meunière (fish in butter sauce), French onion soup, French crêpes (or gluten-free crêpes or vegan crêpes), and crème brûlée (or coconut crème brûlée).

Is gratin dauphinois the same as potatoes au gratin?

Traditionally, the potatoes in gratin dauphinois are sliced and placed in a dish raw with cream and/or milk. Then the potatoes are cooked in the dairy.

Since the potatoes are added to the dairy while they’re still raw, the starch mixes with the dairy and forms a gluten-free, rich, and creamy sauce— no flour or thickeners needed.

In contrast, potatoes au gratin traditionally uses sliced potatoes that are boiled in water, drained, and then cooked again with dairy.

Au gratin recipes often include a flour roux to help thicken the milk.

Do I Really Need a Cast-Iron Pan for This Recipe?

Not technically, but you do need a pan that is both stovetop and oven safe.

Cast-iron pans are generally the easiest and most affordable option for an oven-safe pan, and since they retain heat well, your potatoes will cook evenly.

I use this Lodge 10″ cast iron skillet to make gratin dauphinois.

Start with two pounds of Russet (or Idaho) potatoes. Peel and thinly slice the potatoes.

I prefer to use a sharp chef’s knife to slice potatoes (this is my favorite knife), but if you have a mandoline (like this OXO mandoline), you’ll be able to cut your potatoes more quickly.

Safety tip: Mandolines are EXTREMELY sharp and can be fairly dangerous to unprotected fingers. Make sure to wear a cut-resistant glove while using a mandoline, or at the very least, use a cutting guard.

Add the potatoes concentrically to the pan.

This part does not have to look perfect– I just happen to think it’s kind of fun to swirl the potatoes into pretty layers.

If layering potatoes stresses you out, remember that you’ll be adding cheese, and the cheese will cover any potato layering that didn’t go as planned.

Next, you’ll heat a small pan with milk, cream, garlic, herbs and spices.

Pour the warm milk over the potatoes.

Par-Boil the Potatoes in the Dairy

Place the pan on the stovetop, and bring the milk to a simmer.

Add Cheese to the gratin dauphinois

But I say– go ahead and add it anyway!

Freshly grate some cheese– my favorites in gratin dauphinois are smoked Gruyère or blue cheese, but you could also use Parmesan– and layer it on top of the potatoes.

Cheese Shopping Tip: I used Red Apple brand smoked Gruyère in this recipe. It’s a fairly easy-to-find cheese, even if you live far away from a gourmet grocer.

Slide the potatoes into the oven, and bake until the cheese is golden and gorgeous.

Serve these potatoes while they’re warm (or reheat them in the oven later), and– as Julia would say– bon appetit! 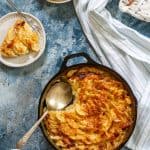