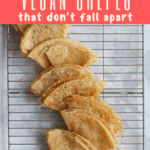 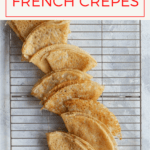 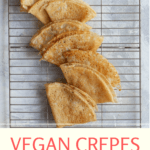 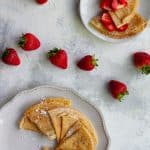 These vegan crêpes are based on Julia Child’s French crêpes! These crêpes are made with aquafaba instead of eggs to create crêpes that are light and delicate, but still sturdy enough to flip and fold.

I’ve been a crêpe-oholic lately.

My mother-in-law’s one innocent little crêpe request reminded me how wonderful these thin French pancakes are.

And here we are– weeks later– and I’m still holed away in the kitchen making traditional French crêpes and gluten-free crêpes.

But one crêpe eluded me. Taunted me.

Did NOT work the way I wanted it to.

Why did I press on? Why did I keep trying?

Because you guys asked me for the recipe!

And I wasn’t going to stop until I had a vegan crêpe that tasted just as delicious as traditional French crêpes.

What’s In a Crêpe?

I based this recipe on Julia Child’s recipe for traditional French crêpes, and I knew I’d have some challenges to make the recipe vegan.

What had to change?

In other words– what’s in a traditional crêpe that is not plant-based?

Eggs. In case you’re wondering– this is the one that gave me the most trouble.

Milk. This one is an easy fix!

Butter. I have thoughts on butter vs. oil. Keep reading.

Can I Just Skip the Egg in a Vegan Crêpe?

In my opinion, no.

The egg is what binds the batter together, and it also helps the crêpe rise slightly.

If you simply leave out the egg without replacing it, your crêpes will be extra fragile and hard to flip. They’ll also be more brittle and cracker-like.

Brittle and cracker-like are not characteristics of a good crêpe!

And yes– I realize that a lot of other vegan crêpe recipes out there will tell you to simply skip the egg.

Even though I was skeptical, I did test these crêpes without an egg replacement– and those crêpes went in the compost bin.

Guys– I tried SO MANY egg replacements.

I tried a flax egg, but it was too grainy.

I tried using unstrained homemade oat milk, because I hoped that the oats would act as a binder. That didn’t work.

I tried using baking powder to help the crêpes rise gently– but those crêpes stuck stubbornly to the well-oiled pan. I don’t know why they stuck, but they did– badly.

Happily, I was documenting all of my vegan crêpe failures in my Instagram stories, and two of you rushed to help me!

Thank you Maddie and Allison for all your troubleshooting and ideas!

Aquafaba, or chickpea brine, is the leftover liquid from cooked chickpeas.

Most commonly, aquafaba is whipped until it has stiff peaks and is used as an egg white replacement.

But here– we’re doing something easier. We’re simply adding the (un-whipped) chickpea brine to the crêpe batter, and it acts as an egg binder in the vegan crêpes.

Want to learn more? Read A Guide to Aquafaba from Minimalist Baker

I tried it with a few, and it didn’t seem to matter which I used.

Keep in mind that some non-dairy milks will be thicker than others. You want the crêpe batter to be thin and easy to pour (slightly thinner than pancake batter).

If your batter seems too thick, simply add a little more cold water.

Also keep in mind that your milk might change the flavor of the crêpes, but that’s not always a bad thing.

For one test, I used coconut milk (from a carton, not from a can) from Trader Joe’s, and the crêpes tasted a little like toasted coconut.

Should I Use Oil or Vegan Butter?

Usually, if a recipe calls for butter, and I want to make it dairy-free or vegan, I swap the butter for oil.

For example, in this vegan baklava, both olive oil and coconut oil work perfectly as a butter replacement.

However, swapping butter for oil didn’t work well with these crêpes.

The texture was okay, but the flavor was lacking.

Instead of oil, go with vegan butter.

Vegan butter should be easy to find. Look for it next to the dairy butter in the grocery store.

I like to use Miyoko’s cultured vegan butter, but Earth Balance is also easy to find.

What Pan Should I Use?

I either use a non-stick pan or a cast iron crêpe pan (like this Lodge crêpe pan).

Most recently, my favorite crêpe pan is one of those mini cast iron pans that come with chocolate chip cookie gift packets.  It’s small, heats evenly, and is just completely perfect for crêpe making!

What Can I Serve with Vegan Crêpes?

My favorite way to eat crêpes is with some fresh fruit and a little powdered sugar.

However you serve your crêpes– bon appétit! 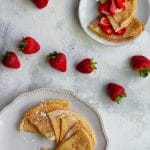 Yields: About eight 10″ crêpes, ten 8″ crêpes, or twenty 5″ crêpes Nutrition information is for one 8″ crêpe, and does not include optional ingredients. About the Resting Time:  The rest time allows the gluten to relax.  If you skip it, your crêpes will still be delicious, but they might have more bubbles (holes).