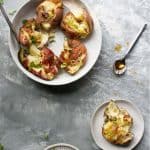 These vegan Salt and Vinegar Smashed Potatoes are a crispy, easy side dish.  Serve them with dinner or at your next Game Day!

Over the summer, I listened to an episode of the Bon Appétit Foodcast that had me drooling.

Carla (one of the show’s regulars) started talking about making salt and vinegar smashed potatoes on the grill.  And I could not stop thinking about it.

Except– I was feeling a little lazy.  And I didn’t have any charcoal for my grill.

But friends– I did have potatoes.

These salt and vinegar smashed potatoes are delicious, carb-tastic treats that you won’t want to stop eating.  They’re a perfect little side dish for everyone who loves salt and vinegar potato chips.  Make them for dinner or as a game day snack!

What Kind of Potatoes Should I Use?

Russet potatoes are a little large for smashed potatoes (although you could try cutting them in half before smashing). For Russet potatoes, I prefer to make these crispy oven fries and then serve them with vinegar.

If you’ve got lots of extra potatoes on hand, try freezing potatoes!

What Type of Vinegar Should I Use?

If you want the classic, tart, salt and vinegar flavor– use malt vinegar.  My favorite is London Pub malt vinegar.

And if you haven’t tried malt vinegar before– go buy some.  It’s the best.

Keep in mind that malt vinegar is not gluten-free.

If you need to switch to another type of vinegar, these potatoes are also delicious (but somewhat less “potato-chip-ish”) with apple cider vinegar.

Should I Bake these on a Cast Iron Pan or a Baking Sheet?

I assumed baking inside a cast iron pan would result in crispier smashed potatoes, but cast iron pans won’t hold as many potatoes as a baking sheet.

So I tested it.

The results surprised me– I found that both sets of potatoes were equally crispy.  So– use either a cast iron pan or a metal baking sheet.

Avoid cooking these potatoes on silicon– they won’t get crispy.

Will the vinegar make the smashed potatoes soggy?

Not if you add the vinegar right before serving.  The vinegar will simply act like a sauce, and add a little moisture and flavor.

I would avoid adding the vinegar a long time before serving.

If, for example, you’re packing leftover potatoes for lunch the next day, store the vinegar in a separate container and drizzle it on right before you eat them. 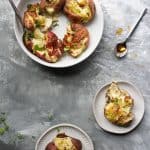 This recipe can be easily halved or multiplied.  Nutrition information is based on red potatoes, not Yukon gold.