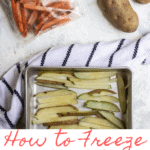 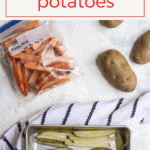 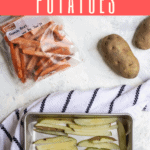 Want to save potatoes for later? Learn how to freeze potatoes, including blanching techniques and tips for cooking with frozen potatoes.

We’re growing (or attempting to grow) potatoes in our garden for the very first time.

I’m both excited and also a little overwhelmed, because I’m usually unable to use a bag of potatoes before they go bad.

It’s mainly an issue because I dislike food waste, but also because rotting potatoes smell like death.

And so, when I found myself with a few too many store-bought potatoes, I decided to start practicing preserving potatoes for later.

If you (like me) find yourself with an abundance of spuds, this tutorial is here to help. Here’s how to freeze potatoes (and what to do with them).

Can I Freeze Raw Potatoes?

Potatoes have a high water content, and if you dice and freeze them raw they’ll be ugly afterwards.

The texture will be off, as well as the color. Apparently they can even turn black when you cook them. No bueno.

So no, don’t toss your potatoes into the freezer raw.

And yes, I know blanching potatoes (or anything, actually) is a complete pain. I wish I could tell you to freeze them raw!

The good news is, blanching isn’t complicated, and you can blanch lots of potatoes in a short period of time by working in batches.

How to Blanch Potatoes

Start by cutting your potatoes into whatever shape you’ll want to use later.

I typically cut my potatoes into fries, because that’s the way we typically eat our frozen potatoes.

If you’re using very small potatoes, such as petite or fingerling potatoes, you can leave them whole. Keep in mind that they’ll take up more freezer space if they’re whole.

Bring a large pot of water to a rolling boil.

And yes, really, a rolling boil. Not a simmer.

If you don’t have one, you could also use a pasta strainer basket (make sure it fits in your pot) or just strain the potatoes out with a large slotted spoon. If you go for the spoon option, you’ll have to work quickly!

Blanch the potatoes in the boiling water for 3-5 minutes, depending on how small or large the pieces of potato are. I usually blanch fries for 4 minutes.

Next, here’s what you’re supposed to do:

As soon as they’re done blanching, pull the silicone basket out of the water and put it straight into an ice bath.

Here’s what I actually do (because I do not have an ice maker, and never have much ice on hand):

As soon as they’re done blanching, pull the silicone basket out of the water and put it straight into the sink, rinsing immediately with cold water.

My way works just as well (in my opinion), so if you don’t have lots of ice on hand, just make sure to spray them off with cold water right away.

Next, move the potatoes to a towel to dry.

How to Freeze Potatoes

Line a baking tray with wax paper, and place the blanched, cooled, and dried potatoes on the tray in a single layer.

If you know how you’re going to cook them later, you can go ahead and season them now. When I’m freezing fries, I like to toss them in oil, salt, and spices at this point.

Leave them in the fridge for about 15-20 minutes (until hardened), and then move them into a freezer bag (or another air-tight container).

Label the container, and use the potatoes within a year.

Can I Use Any Kind Of Potato?

In general, waxy potatoes (like Yukon gold) will freeze better than starchy potatoes (like Idaho). That said, I regularly freeze both Idaho and sweet potatoes, and this technique works perfectly.

How to Use Frozen Potatoes

Use them however you’d use regular potatoes! Depending on the recipe, you might need to extend the cook time slightly.

I love to make fries with my frozen potatoes (like these crispy oven fries or these white sweet potato fries).

Whatever you plan to do with your frozen potatoes, I recommend having an idea of what you’ll do with them before freezing, so that you can cut them and season them accordingly. 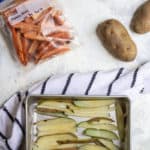 How to Freeze Potatoes

Cost: $1 per potato
Prevent your screen from going dark