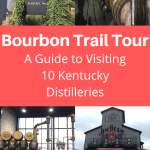 Love bourbon?  Come with me on my Kentucky Bourbon Trail Tour (plus my favorite off-trail distillery)!  The Bourbon Trail is easy to navigate and a fantastic getaway for bourbon lovers!

If you’re a bourbon-fan, make sure to check out these posts too: The BEST Bourbon Recipes and How to Drink Bourbon: A Beginner’s Guide

What is the Kentucky Bourbon Trail?

If you, like me, enjoy tours of vineyards, distilleries, and breweries — listen up!

Most people know that the winery clusters in California, Italy, and France make for spectacular vineyard-hopping getaways.

But wine isn’t the only beverage that has outstanding geographic regions!

Did you realize that several major bourbon distilleries in Kentucky are also clustered together?

These distilleries make up the Kentucky Bourbon Trail!

Kentucky’s native limestone rock makes bourbon production easier, and 95% of all bourbon is made in Kentucky.

As of May 2022, the Bourbon Trail has EIGHTEEN (and counting) official stops.

Here are some tips to help you plan a visit through nine distilleries on the Kentucky Bourbon Trail, and one that’s off-trail!

What else is nearby?  While you’re visiting Kentucky, make sure to go hiking at Natural Bridge near Lexington! If you’re exploring during early summer, check out Woodstock Lavender Company near Somerset.

Bourbon Trail Tours: Are They Expensive?

If you’re on a tight budget, I recommend visiting Buffalo Trace. They’re off the official trail, but they had a fantastic tour.

How Long Do the Bourbon Tours Take?

Most tours are around an hour and tend to run on a set schedule.

How Many Distilleries Can I Tour in One Day?

Plan on doing 1-3 distilleries per day, since most of them require some driving to get to.

The best bourbon tours I’ve had, with smaller crowds, have been on weekdays. Especially the first tour of the day.

Whatever you do, remember that the first weekend in May is Derby Weekend.

If you plan your trip then, be prepared for major crowds.

Book your hotel FAR in advance, and call the distilleries ahead to find out what their touring schedule is for that weekend.

Keep in mind that most distilleries ARE NOT IN PRODUCTION during July and August because it’s simply too hot for the distilling process.

If you tour in those months you may not get to see as much of the bourbon-making process.

How Much Bourbon Will I Get to Taste on a Tour?

It depends on the distillery, but somewhere from 2 to 4 tastings.

Kentucky law limits the amount they can give out.

Some of the tours give you loot in addition to the tastings.

You might get a bourbon ball candy, a souvenir glass, or even a bourbon bottle label.

U.S. law says you have to be 21 to drink alcohol, so any tastings obviously require you to be old enough to drink.

Many distilleries do still allow underage people to tour, sometimes at a cheaper price. (They just aren’t allowed to drink anything!)

Their websites will let you know for sure when you’re booking a tour.

$12 per person tour and tasting.

The Alltech/Town Branch distillery/brewery is small, but it’s one of my favorite tasting experiences.

The short tour includes not only the distillery but also Town Branch brewery – where they make Kentucky Bourbon Barrel Ale.

The tour includes four tokens that let you choose which drinks you want to sample, from both distillery and brewery drinks.

I’ve visited this distillery three times, and it’s still one of my favorites!

This is a nice stop if you’d like to shake up your bourbon experience with some local brews.

Woodford Reserve is like the country club on this distillery tour.

The distillery grounds are gorgeous, with limestone buildings and lush green countryside.

The tour takes you through the large distilling area and the rickhouses (where they store the bourbon barrels).

Our tour was on Derby weekend, so the entire area was extra crowded.

We were able to sample two bourbons and got a free bourbon ball candy.

Was my Derby weekend tour different than the normal tour?  Maybe.  I’ve heard from friends who were able to sample more than two bourbons on their Woodford tour, so it’s possible ours was different because of the Derby.

Because of the crowds, tours were running every 15 minutes instead of every hour, and they had free mint julep balls in the gift shop.  Score!

Note: The Wild Turkey Visitor Center is temporarily closed for renovations, with an estimated reopening date in fall 2022. Tours and tastings are suspended during the closure.

The Wild Turkey Distillery is surrounded by beautiful Kentucky countryside.

The tour includes four samples, and we went home with an extremely high-quality, heavy-bottomed tasting glass.

As for the tour itself, we had bad timing – a Saturday afternoon in August, just as university students came back into town.

Our tour group was huge, and the tour guide was pretty soft-spoken with a broken microphone.

I’d definitely recommend heading to this extra-popular spot on a weekday morning.

I’ll be back, Wild Turkey!

The Four Roses Distillery, unlike most Bourbon Trail stops, doesn’t actually age ANY of their bourbon at this location.

This location distills the grains, and then they’re aged at the Four Roses Warehouse.  So you’ll see the distilling vats, but not any rickhouses or aging barrels.

We were able to sample three bourbons and keep the tasting glass.

$16 per person tour and tasting.

Note: As of May 2022, facility tours are suspended for the time being, but you can still do a tasting!

We opted for a 30-minute tasting here, which included three bourbons and the tasting glass.  It was short, sweet, and a nice side-trip while we waited for our Jim Beam tour.

$22 per person tour and tasting.

In my opinion, Maker’s Mark was one of the best tours of the actual distilling process.

Our tour included a walk-through of the large distillery area, a chance to taste the mash of fermenting grains, a view of the production line, a bottle label, four tastings, and a chance to hand-dip a bourbon bottle in their signature red wax.

Quick Tips: This is one of the most popular spots on the Bourbon Trail – if you can go on a weekday morning, I’d recommend it.  I also recommend checking the Maker’s Mark website for directions, because our GPS took us the wrong way.

Heaven Hill does not have an on-site distillery, but you can learn about the history of Heaven Hill, see the on-site rickhouse, and (obviously) have a bourbon tasting.

We decided to go for the connoisseur experience, and really enjoyed it.

This option costs more because of the quality and price of your tastings: you can try bourbons that are $200-$300 a bottle.  If you don’t think you’ll have another chance to try high-end bourbon, this is your chance!

The Jim Beam Distillery was one of the most well-run, informative tours on the trail.

As of 2022, Jim Beam has opened an expanded visitor center, with new tasting rooms and a restaurant!

The tour included their distillery and rickhouses, a chance to taste the mash of fermenting grains, and a chance to smell or taste undiluted bourbon straight from the barrel.

We could also clean an empty bourbon bottle (by washing it with bourbon, of course), set it on the bottling line, and then add the wax seal, if purchasing a bottle.

Jim Beam definitely had the most tasting options— including their classic bourbons, single barrel bourbons, and flavored whiskeys.

The tasting glass is included in the tour price.

Jim Beam also has a tasting room in downtown Louisville.

For $8, you get a shot glass to keep, and four bourbon tastings.  It’s only a short walk from the Evan Williams distillery.

We went to the Bulleit Distillery on a Monday morning, and had a tiny tour group and a fantastic tour!

The most enjoyable part (other than sampling four bourbons) was listening to the guide tell us about the history of the bourbon industry.

Evan Williams provides the most unique Bourbon Trail tour I’ve been on.

There’s no large distillery on site, and you only get a brief glimpse of the small artisan distillery.  Even so, it’s an enjoyable, incredibly interesting tour.

The entire tour felt like walking through an interactive play, with rooms turned into reproductions of old Evan Williams buildings and historical Louisville.  A lot of the tour was via videos shown as the guide led you from room to room.

The tasting included three bourbons and a bourbon ball.

The Speakeasy experience was sold out when we got there, but seemed similar to the Heaven Hill connoisseur tour (which makes sense, because Heaven Hill is the parent company for Evan Williams).

You’ll see a lot of the same bourbons available to buy at both locations.

New Distilleries on the Bourbon Trail

So much for the nine original distilleries on the Bourbon Trail!

Before we get to my favorite off-trail experience, here’s a round-up of the newest distilleries that have been added to the official trail in the past few years.

$15 tour and tasting; specialty tours, tastings and classes available. See our separate post for this distillery.

$15 tour and tasting; specialty tasting and classes available. See our separate post for this distillery.

While I was researching the Bourbon Trail, one distillery kept popping up – the Buffalo Trace Distillery.  It wasn’t on the trail, but it did look exciting!

I contacted Buffalo Trace, and they had me over for a tour and for one of their über fancy Craftsman Dinners.

All the tours at Buffalo Trace are – get this – FREE!

And of course, you get to sample a few spirits, and Buffalo Trace’s version of Irish cream.  (Faaaabulous!)

What Tours Does Buffalo Trace Offer?

Buffalo Trace has THE BEST tour variety of any other distillery we visited.

They have a standard tour, a Hard Hat tour, a Bourbon Barrel tour, a Historical Landmark tour, and the “Old Taylor Tour.”

We did the Taylor tour, which included a tour of the archaeological ruins of an old bourbon distillery!  It was – without question – the most unique distillery tour I’ve been on!

I will be back, Buffalo Trace!  I’ve got my eye on the hard hat tour!

What about you?  Have you been on a Kentucky Bourbon Trail Tour?  What did you think?  Let me know in the comments!

Want to see EVEN MORE bourbon?  Browse all of my bourbon recipes!