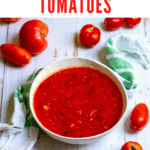 Love fire-roasted tomatoes? Try making them at home by broiling the tomatoes in the oven! Freeze and use all winter long.

Few things in life are better than a sliced fresh tomato with a little salt and pepper.

At some point, though, there are simply more tomatoes than you can use before they go bad. I won’t say “too many tomatoes” because that’s clearly not a thing.

What can be done?

Clearly, the tomatoes need to be preserved for later.

And of course, I’ve been making (and freezing) fire-roasted tomatoes.

If you follow along with my Instagram stories, you’ve probably been watching me prep and freeze tomatoes.

For these fire-roasted tomatoes, we’re using the same technique I use for fire-roasted salsa (and mango habanero salsa).

What Kind of Tomatoes Can I Use?

Use any type of juicy tomato (slicing tomatoes) or paste tomato (such as Roma).

Use whichever tomato you have on hand.

Core the tomatoes and slice them in half horizonally.

Place the tomatoes cut-side down in an oven-safe pan. I used this Lodge 12″ carbon steel skillet.

Slide the tomatoes into the oven, and roast until the skins are charred.

The larger and juicier the tomatoes are, the longer they’ll take to char.

Use the chop function to dice the tomatoes.

If you want a smoother tomato blend, continue pulsing until the tomatoes are more finely chopped.

At this point, you can either use the tomatoes immediately, refrigerate and use within a few days, or freeze them for longer storage.

Can I Use These As a Replacement for Canned Tomatoes?

These tomatoes are an awesome replacement for store-bought canned fire-roasted tomatoes.

I like to freeze my tomatoes in 14-ounce portions, the same size as a standard (small) can of tomatoes.

How to Use Fire-Roasted Tomatoes

For instance, I use fire-roasted tomatoes in this red lentil dal (and Instant Pot dal), palak paneer, and vegan split pea soup.

These tomatoes are also delicious in any recipe that would benefit from a smoky flavor, like in this tortilla soup or beer chili. Simply swap the tomatoes in the recipe for the same amount of fire-roasted tomatoes.

Prepare and freeze your tomatoes now and enjoy them all year long! 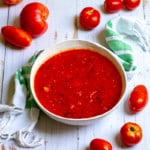