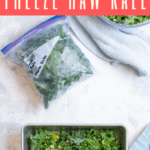 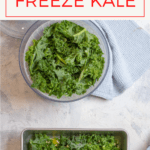 Learn how to freeze raw kale! This freezer tutorial is a perfect way to preserve this leafy green, and is great for both gardeners and meal prepping.

We’ve had a lot more time at home than usual this spring, and I’ve been filling my time by starting my container garden earlier than usual.

Most years, I completely miss out on spring gardening, but this year I planted all kinds of leafy greens, including (obviously) so much kale.

And I’m pretty excited about it.

When the kale begins to pop up above the dirt and I start harvesting the dark leafy greens, I will (no doubt) need to find a way to preserve some of the kale for later.

After all, there are only so many raw kale and apple salads I can eat in one day!

Recently, I bought kale at the grocery store and tried out some kale preserving techniques. And one method was definitely the easiest and the fastest.

It was, you guessed it, freezing raw kale.

This freezing technique is also perfect if you bought more kale than you can use at the store or farmer’s market and want to save it for later!

How to Freeze Kale

Start by trimming off the thick kale stems, and then roughly chop the leaves.

If you bought a bag of chopped kale at the store, you can skip this step!

Next, rinse off the kale in a colander, and dry it in a salad spinner if you have one.

Don’t have one yet? I love and highly recommend my OXO salad spinner. I’ve used mine for several years, and it’s much higher-quality than ones I used in the past.

You can also rinse the kale and then lay it out to dry on a towel. Pat it dry with another towel, and then let it air-dry if it’s still damp.

Next, lay the kale on a baking sheet or another tray that will fit inside your freezer.

Depending on how much kale you’re freezing, you might have to work in batches.

My freezer has French doors and a standard baking sheet won’t fit, so I use a metal baking dish instead.

Leave the kale in the freezer for about 15 – 20 minutes, until it’s crunchy and frozen.

If you’re in a hurry, you can skip this first freeze. But know that your kale will probably freeze together in one big clump. Depending on how you plan to use your kale, that may or may not be a problem.

After freezing the kale in a single layer, stuff it into a freezer bag. Shove as much into the bag as you can.

If you don’t like the idea of using disposable bags, consider investing in a few Stasher reusable food bags.

How Long Does Raw Kale Last in the Freezer?

Use your frozen kale within a year.

And make sure to label the bag so that you know how old it is.

How to Use Frozen Raw Kale

Once frozen, the kale will never have the same crisp texture that it had before freezing. The water inside the kale will freeze, crystalize, and well, cause the thawed kale to be slightly less crisp.

In other words, you won’t want to use thawed kale for a raw kale salad, because it’ll be too mushy.

Instead, use this frozen kale in cooked meals, such as soup, stews, and curries. I like it in this white bean and kale soup, and it would be a delicious swap for the spinach in this palak paneer with feta. 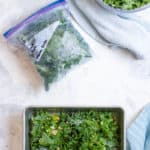 How to Freeze Kale

Cost: $3 per lb of kale
Prevent your screen from going dark

Freezing vegetables will change the consistency and texture of the veggies.  Once frozen, kale should be served cooked or in a smoothie. Serving size estimated at 2oz kale per person.
Tried this recipe?Leave a comment and rating below!
« White Sweet Potato Fries
Instant Pot® Kale (Slow Cooker) »