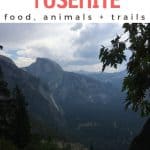 Are you planning on backpacking in Yosemite National Park?  This guide will walk you through packing food, what animals to look for, and what to expect on the trails.

We almost didn’t go to Yosemite.

In August 2018, the Ferguson fire raged through the Yosemite area and closed most of the park.  We watched intently from far away as firefighters battled multiple fiery blazes all across the state, and we waited.

Days passed, and then weeks.

We prayed for friends who’d been displaced from their homes, for others who lost homes, and we waited.

As we waited, we made backup plans. We were able to get backpacking permits in another of California’s national parks, Lassen.

But we’ll have to check out Lassen another day, because just before we planned to leave for California, the fires calmed and the smoke cleared.

The husband and I packed our bags, and were Yosemite bound for our first multi-night backpacking trip.

Our trip was eventful, filled with gorgeous scenery, and did not go exactly as planned.

Here’s what went right, along with what we learned.

Planning a trip to Yosemite? Check out my recommended gear for hiking in Yosemite, and my trail guide for Upper Yosemite Falls!

Where is Yosemite National Park?

This extra-popular national park in Central California is made up of large granite mountains and pine forests within the Sierra Nevadas.

The granite mountains are startling— they form walls so tall that they often block the sun, creating the illusion of a grey winter day even when the sky is clear and blue.

Is there public transportation to Yosemite?

We took the YARTS bus into the park.

It was affordable, the ticket price included the admission fee to the park, and we weren’t paying for a rental car that we wouldn’t be using while we hiked.

But— this was one of the things that went wrong for us.

We bought tickets to ride the bus from Merced, California into the park, and waited– tickets in hand– at the bus depot.

Even though I read online that YARTS arrives on time 98%-99% of the time, the day we headed to the park— our bus was an hour late arriving.

And (probably because it was a holiday), no one answered the phone at the dispatch when we called to see if the bus was coming.  There was no electronic schedule with delay updates.

That said, the bus ride out of Yosemite went smoothly and was on time.

I haven’t decided if I’d take the bus again.

There’s plenty of food available to buy inside the park.

Yosemite is a massive park and has both grocery stores and cafes.

We spent most of our time near Half Dome Village (Curry Village), where we ate at the pizza shop, bought coffee and bagels at Peet’s, and devoured a delicious seafood dinner at the Half Dome Lodge cafeteria.

For car camping, you have to store all food in the provided bear locker.

If you’re backpacking in Yosemite, all your food, along with anything scented– like deodorant, chapstick, and bug spray– has to go in a bear canister.

You can buy and bring your own bear canister, or rent one at Yosemite.

The Best Backpacking Food for Yosemite

When you’re backpacking in Yosemite, your food needs to be compact enough to fit in a bear canister. That means that the size of the food matters.

Here are some foods that worked well for us:

Food that will be eaten during the first day doesn’t have to be in a bear canister— as long as it’s always within arm’s reach.

For day one, we brought along some pre-made sandwiches from the Half Dome Village grocery store and a couple cans of Starbucks espresso.

Planning your next trip? Check out my favorite camping and hiking gear.

How to Fit the Food Inside the Bear Canister

Is There Drinking Water at Yosemite?

You’ll find lots of water refill stations within the populated areas of the park— at the villages, at campgrounds, and at some major trail heads.

Once you’re on the trails, you’ll need to filter water from creeks within the park.

Avoid filtering water from creeks that drain directly into waterfalls (like the creek at the top of Yosemite falls), or creek water directly below a waterfall. The current and slippery rocks make it dangerous.

Will There Still Be Creek Water in the Dry Season?

Some creeks (and waterfalls) in Yosemite dry up completely during the dry summer and fall seasons, but there should still be some water sources.

We visited in September after a fairly dry summer, and were still able to find plenty of water.

Check the trail maps for creek and lake locations, and ask a park ranger if you need more help.

What Wild Animals are in Yosemite?

In general, I believe that most wild animals you’d likely encounter on a trail are not actively trying to hurt hikers.

I also believe that they are most likely to hurt humans when startled, so I always try to make my presence known when hiking in isolated areas.

In Yosemite, we made sure to talk or sing loudly when walking alone in the forest.

When walking through tall grass, I always run my trekking pole through the grass ahead of me— an alert to any nearby snakes.

Here are some of the animals you might encounter at Yosemite:

Black bears:  Yosemite has a large population of black bears.  And the bears want your food.

In general, black bears aren’t aggressive, so if you keep your food stored away in a bear canister, all should be well.  Check out these tips for backpacking near black bears.

Somehow, we managed to backpack through Yosemite’s bear-packed wilderness for 4 days and 3 nights without ever actually seeing a bear. But we saw plenty of bear tracks in the forest— so they’re out there.

Keep in mind that bear spray is NOT ALLOWED inside Yosemite National Park, and (as of 2017) there have never been any bear-related serious injuries or fatalities within park boundaries.

Large cats:  Yosemite has a large population of bobcats and mountain lions. Again, we saw tracks, but no actual animals.

Rattlesnakes:  Yosemite has one type of rattlesnake within the park boundaries. We didn’t see any poisonous snakes on our trek.

Gnats and Mosquitoes:  Bring a bug net with you.  Trust me.  On the days when there was no breeze, we were engulfed by swarms of gnats— they flew in our mouths, ears, in between our sunglasses and eyes— and neither the “all natural” bug repellent or the Deet bug spray did anything to stop them.  Bring a bug net.

Chipmunks, Squirrels, + Other Rodents:  These little guys aren’t menacing, but they can steel your food.  And they can carry diseases (like plague and hantavirus). So lock up your food and don’t feed them, pet them, or camp where they seem to be gathering or living.

Other than chipmunks and squirrels, the only wild life that we consistently saw were birds.  Gorgeous ones like steller jays and golden eagles.

Want a list of all animals in the park? Find it here.

Do I Need a Permit to go backpacking in Yosemite?

If you’re planning on backpacking overnight through the Yosemite wilderness— yes, you need a permit.

If you’re planning on hiking Half Dome, you’ll need a permit for that too. Here’s how to get a Half Dome permit.

Is there somewhere in the park to store luggage while I backpack?

We were able to pay 50¢ for one of the lockers in the shower room at the Half Dome Village pool room.

Those lockers will hold a small bag, but they aren’t officially for long-term usage.

So don’t store anything valuable inside— there’s a very real chance it won’t be there when you get back.

Is there somewhere to take a shower after I go backpacking in Yosemite?

Yes! There’s a pay shower at the pool house at Half Dome Village.

When we were there, it cost $5 for a shower, and they supplied the towels.  The shower fee also included access to the swimming pool.

Temperatures:  You can find general temperature estimates for Yosemite Valley here, and more area-specific forecasts here.  but keep in mind that if you’re hiking above the valley on a rock shelf that it will be significantly colder than in the valley.

The weather estimates for Tuolumne Meadows were closest to the temperatures we experienced on the high elevation trails.

We misjudged how cold the nights would be while hiking and regretted it— I recommend bringing an ultra-light sleeping bag.

Rain and Snow:  Summer and fall are the driest seasons in Yosemite, but that doesn’t mean that you won’t get stuck in a summer storm.

We went at the beginning of September, when the rain estimates told us that Yosemite averages 1 day of rain per month.

It rained— not once, but TWICE— during our visit.

And the second rain was a long, soaking storm.

Our ponchos weren’t enough to keep us dry, so we hid under the rain tarp that came with our tent. When it was clear that the storm wasn’t ending anytime soon, we pitched our tent in the rain and waited out the storm.

I highly recommend traveling with a rain tarp.

If you’re backpacking in Yosemite in late fall through early spring, be prepared for snow.

Do I Need Hiking Boots?

I recommend hiking boots, or at the very least— a shoe with excellent grip.  If you’re backpacking Yosemite, you’ll probably want a boot with a little ankle support to help with the weight of your pack.

Looking for a hiking boot?  We love our Keen hiking boots. I wear a leather Keen Terradora and my husband wears a Keen Targhee II.

I saw plenty of people hiking in tennis shoes, but make sure that you do not wear any shoe with worn-down tread.

This was my first experience hiking in the Sierra Nevada mountains, and I was unprepared for how difficult the trail conditions would be.

The Sierra Nevada mountains are incredibly steep, with somewhat flatter, forested areas up high. Getting from the valley areas to the forested areas is no easy task.

Be prepared for steep, rocky trails with lots of loose pebbles and gravel.

The rocks are nearly all granite, which can be rubbed smooth and slick by the boots of all the hikers who came before you.  Be aware that going back down the steep trails can often be more technically challenging than going up.

Ankle and knee injuries are common on these trails, so take precautions by wearing ankle-high boots and using a trekking pole.  Step carefully, especially where the rocks on the trails are wet from nearby streams or waterfalls.

We had grand dreams of completing a large, 35 mile loop on trails within Yosemite.

However, the trails were more difficult than we anticipated, the rain slowed us down, and big differences in the actual lengths of the trails vs what we read on Google maps meant that we changed our plans.

As you plan your trip, make sure to grab trail maps of the park areas you’ll be hiking through, and adjust your plans as needed.

Enjoy your trip, and then let me know what your favorite part of Yosemite was!