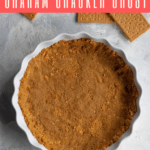 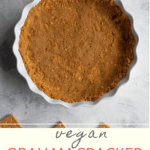 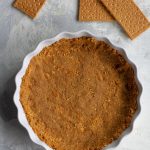 Are you tired of pre-made graham cracker crusts crumbling into pieces when you try to transfer them into a pretty pie pan?

This recipe is for you.

Do you find yourself attempting to salvage broken store-bought graham cracker crusts?

This is for you.

Do you– in an attempt to make your store-bought crust look homemade– spend more time reshaping the crust than it would have taken to make a crust from scratch?

This is for you too.

And– if you’ve ever squinted at the long list of ingredients on store-bought graham cracker crust, and then realized you didn’t know what most of the them were…

This recipe is for you.

And of course, if you’re looking for a VEGAN graham cracker crust recipe– you’ve found the right place.

I bought pre-made graham cracker crust at the store for years.

Once I realized how quick and easy making my own is– I can’t believe I waited so long to try it.

That’s all you need!

And this homemade vegan graham cracker crust is so much tastier than store-bought crust!

Most of them are, yes! Check the label for the ones you’re planning to use.

What Kind of Graham Crackers Should I Use?

I also love making this crust with honey graham crackers— just be aware that these typically do contain honey. So if you’re a vegan who doesn’t eat honey, skip these.

And if you’re positive that cinnamon will go well with your pie– you can’t go wrong with cinnamon graham crackers.

If you want to control every ingredient in your pie crust– you can even try making your own graham crackers! Try these DIY graham crackers from Nourish + Fete— simply swap the honey she uses for agave syrup if you don’t do honey.

What Type of Oil Should I Use?

I usually use olive oil– mostly because that’s what I tend to have on hand.

Keep in mind that some olive oil has an exceptionally grassy flavor– you’ll want to use a mild olive oil for this vegan graham cracker crust.

It would also be delicious with melted coconut oil, or you can use melted vegan butter.

Will this recipe work with real butter?

This recipe was inspired by this buttery, extra-easy graham cracker crust recipe.

I prefer using oil because it shaves a few seconds off the prep-time.

And every second counts!

Does it matter what type of sugar I use?

I’ve made this recipe with both white sugar and coconut sugar. It should also work perfectly with turbinado (raw) sugar.

Do I have to bake the crust?

If you skip baking, the crust will be a lot more crumbly, and will tend to fall apart as you slice your pie.

Did you try making this graham cracker crust? Leave a comment and let me know! 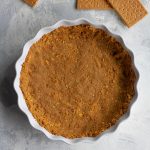 Yields 1 pie crust. How to Make Graham Cracker Crumbs:  Add crackers to a food processor and blend, or add crackers to a large sealed plastic bag and crush by rolling a rolling pin or glass bottle over the crackers. For a Non-Vegan Crust:  Swap equal amounts melted butter for the oil. Nutrition information assumes olive oil and white sugar were used.