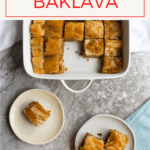 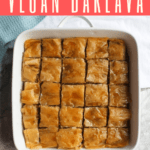 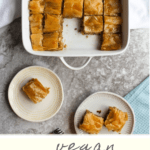 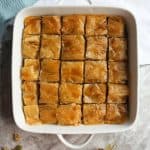 This delicious Vegan Baklava is made with phyllo dough, olive oil, and syrup, and is a sweet twist on the classic Greek, Lebanese, and Turkish dessert.

Do you love baklava?

Of course you do.

We all love baklava!

Baklava love is a universal truth.

And then I learned how to make baklava, and was a little overwhelmed by all the butter.  SO MUCH butter.

And then I heard a theory– a wonderful idea. The theory is (and I buy it!) that since butter was uncommon years ago in the Mediterranean areas where baklava originates, that just maybe, just possibly– this dessert was originally made with olive oil.

But it sounded good, and I love making plant-based desserts (like these vegan crêpes and this vegan apple pie).

So, I tried it. The results were FABULOUS.

This step-by-step tutorial will walk you through how use olive oil instead of butter to make vegan baklava.

Baklava is a Mediterranean dessert made from layers of phyllo dough and nuts, held together with a sweet syrup.

Does Using Olive Oil instead of Butter Affect the Flavor?

Not in my opinion.

I couldn’t tell the difference between olive oil and butter baklava.

Should I Use “Light” Olive Oil?

You can.  I went ahead and tested this recipe with my usual extra virgin olive oil, even though it has a somewhat strong, grassy scent.  The stronger olive oil did not affect the taste, and the grassy notes weren’t noticeable at all.

Does Olive Oil Change Anything About the Baklava?

Yes.  This vegan baklava is slightly more delicate than baklava made with butter, because the olive oil doesn’t seal the layers together as thoroughly as the butter.

When making this olive oil baklava, be extra careful when you cut the pieces apart.  (If any fall apart, just set them back together.)

Another option would be to use coconut oil or vegan butter instead of olive oil.

Is Olive Oil Healthier than Butter?

It really depends on who you ask.  Olive oil has fewer saturated fats, but some argue that butter is more nutrient-dense.

Personally, I think they both taste delicious, but I think olive oil wins here.  Why?

Olive oil is easier to spread thinly, so you can use LESS OIL than butter.  This recipe would need 1 cup (8 ounces) of melted butter, but works perfectly with ⅓ cup (2.6 ounces) of olive oil.

Using olive oil is also FASTER than using butter, because there’s no need to melt 2 sticks of butter.

What is Phyllo Dough?

Phyllo dough is paper-thin dough.  It feels a little bit like tissue paper, and is very fragile.  Handle it carefully.

Handling phyllo dough is probably the trickiest part of making baklava— but when handled correctly, things will go smoothly!

Since I can’t speak for every phyllo dough brand– check the ingredients list on the type you’re buying to be sure.

My Phyllo Dough is Falling Apart– What Happened?

If you try to unroll the dough before it’s completely thawed– it will fall apart.

If the dough gets too dry while you’re working, it may start to fall apart.  Try keeping the dough covered with a sheet of plastic (like the plastic it came wrapped in) and covering it with a barely damp towel.

If the dough has a few tears, or you have to piece a few broken pieces together–it’s okay!  It just makes the dough trickier to assemble.

My Phyllo Dough is Sticking Together– What Happened?

It probably got too wet.  If you’re covering it to keep the dough from drying out, but you notice that it’s beginning to stick together– uncover the dough and let it dry out for a few minutes.

If the air is humid on the day you’re cooking, it’s probably better to leave the dough uncovered.

Is there a quick thaw method for frozen phyllo dough?

No, not that I’ve found.

This dessert requires a lot of planning ahead– and one of the things you need to do ahead of time is put the frozen phyllo dough in the refrigerator to thaw for about 24 hours, up to a week.

I’ve read that you can microwave thaw by heating the dough for 1 minute on high, but for me– this was a major fail.

Also, since you can’t unroll the dough before thawing– it means microwaving thin plastic, so I give this method a solid NO.

How Do You Cut Phyllo Dough?

To trim the dough to fit your pan, the easiest method is to use kitchen shears or scissors.  (It’s incredibly difficult to trim sheets of phyllo dough with a knife.)

Once the dough is assembled into baklava, but before baking, use a paring knife to cut it into small pieces.  Always cut the baklava into pieces BEFORE you bake– it’s too fragile after baking.

Does Baklava Use Honey or Syrup?

In general, traditional Greek baklava uses a honey-based syrup, and Lebanese and Turkish baklava are made with other syrups.

Since honey is not considered vegan, for this recipe I used agave syrup.

If you prefer honey, or if you’re a vegan who eats and loves honey (a “bee”gan), check the recipe card notes for directions.

Do You Really Have to Add Oil (or Butter) To Each Layer of Phyllo Dough?

There’s a baklava shortcut floating out there in recipe land– and it says that you don’t need to add fat to each layer of baklava.

In my experience, occasionally skipping a layer of oil (or butter) is okay.  If two sheets of dough stick together, instead of fighting with them, I skip the oil.

Skipping several layers of fat (in my experience) leads to soggy layers– layers that didn’t crisp up while baking.  I also found that skipping fat made the phyllo layers more likely to fall apart.

What Type of Nuts are in Baklava?

The three nuts you’ll typically see in baklava are walnuts, pistachios, and almonds.

In this recipe, I use all three, but feel you can mix and match the nuts here– just make sure to keep the quantities the same.

How to Make Vegan Baklava

To make this vegan baklava, you’ll simply be layering phyllo dough brushed with oil along with a few layers of chopped nuts.

Think of it like a pasta and nut lasagna.

After layering the phyllo, oil, and nuts, use a sharp paring knife to cut the baklava into squares or diamonds.

Make sure to cut the dough BEFORE baking, because if you try to cut it after, the dough will crumble into pieces. Ask me how I know that.

Slide the baklava into the oven. While it bakes, make the syrup.

When the baklava finishes baking, pour the syrup over the dessert, and let it rest for about 2 hours.

And then– you get to eat the baklava AND do a little happy dance! 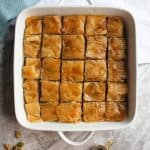 Make more baklava: Recipe is easily doubled.  If doubling, use a standard-size lasagna pan. Timing considerations: Note that recipe should rest for 2 hours before serving.  If using frozen phyllo dough, it should be moved to the refrigerator to thaw about 24 hours before handled. Recipe variations (Note that variations using honey or butter are not considered vegan):

Recipe adapted from two classic baklava recipes– one from Tyler Florence, and one from Alton Brown.