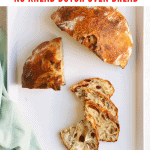 This no-knead sourdough cinnamon bread is a beginner-friendly artisan loaf with raisins or dried cranberries. Proof overnight and then bake in a Dutch oven!

Are you in a baking kind of mood?

Specifically, I’ve been baking sourdough bread. Lots and lots of it.

Most recently, I’ve been in the mood for something ever-so-slightly sweeter like this sourdough cinnamon bread. This is a no-knead, artisan-style sourdough bread that’s baked in a Dutch oven.

Is This a Sweet Cinnamon Bread?

If you prefer, you can leave the sugar out of this recipe entirely, or (my preference) only use a little sugar for just a hint of sweetness. For those of you with more of a sweet tooth, follow the recipe card suggestions for using extra sugar.

Keep in mind that this is still very much an artisan sourdough bread, with a crusty outer layer and a mild tang.

You won’t mistake this bread for fluffy cinnamon rolls no matter how much sugar you add, but you can use extra sugar to turn this bread into a sweet treat.

Is This Sourdough Cinnamon Bread Difficult to Make?

It’s not difficult, but it is time consuming. This bread takes two days to prepare from start to finish, but most of the time is hands-off.

Also, there are a lot of steps to follow, which may seem overwhelming if you’re not used to baking sourdough bread. That said, this loaf is “beginner-friendly” in that there are no special techniques needed, not even dough kneading!

I recommend reading through this entire post (and the recipe card) in full before beginning. Make sure you have everything you need and that you (at least mostly) understand the process before jumping in.

Most importantly, have fun with your bake!

Can I Skip the Sourdough Starter?

The sourdough starter provides the leavening in the bread, so without it your bread will not rise.

Can I Use Sourdough Discard Instead of Active Sourdough?

No. For this recipe, you need to use the starter when it’s active and bubbly, not after the bubbles diminish.

Do I Really Need Bread Flour?

Yes. Bread flour is a high-gluten flour and bakes differently than all-purpose flour.

Bread flour should be easy to find at your local grocery store, but if you want to use all-purpose, you’ll need to mix it with vital wheat glutens to make homemade bread flour. Check the recipe card notes for directions.

Can I Make This Sourdough Cinnamon Bread Gluten-Free?

This bread recipe relies on gluten to form the structure of the bread.

Do I Need a Dutch Oven?

For this recipe, yes.

You’ll want a five to seven-quart Dutch oven with high sides (not a braiser). I use a five-quart cast-iron Dutch oven.

What Other Equipment Do I Need?

I highly recommend using a digital kitchen scale to weigh your ingredients. I use this OXO digital scale.

It’s also helpful to have a digital thermometer to know exactly when to take your bread out of the oven.

Other items that I’ve found helpful, but that are totally optional, are a large silicone pastry mat, a bread lame, a flexible dough scraper and a spray bottle filled with water.

Do I Need a Stand Mixer?

I do use the paddle attachment on my Cuisinart stand mixer to mix the sourdough cinnamon bread dough together, but all you really need is a spoon or a dough whisk.

Start by mixing together the starter, bread flour and water. Mix until the dough no longer clings to the bowl.

Leave the dough to rest for about 20 minutes.

This rest period is called an autolysis rest, where the dough will begin to form gluten without kneading.

Next, add the salt to the dough.

After adding the salt, place the dough in a bowl, cover with a damp towel and allow the dough to rest for one hour.

Next, move the dough onto a dampened work surface. I use a large silicone mat.

I find it’s easiest to work with this dough if I periodically spritz water onto my work surface, hands and flexible dough scraper.

Stretch the dough out.

It doesn’t have to be perfect, just use your hands to stretch it out until it (sort of) resembles a piece of paper.

I typically fold the top down first and then the bottom up.

Fold the dough in thirds again, this time folding in from the sides.

You’ll be left with a square(ish) piece of dough.

Flip the dough over to the other side.

Stretch and fold it again (exactly the same way) on the other side.

Return the dough to the bowl, place the damp towel back on top, and rest the dough for another hour.

During the final stretching and folding period, you’ll add the flavors.

Stretch the dough out (just like before). This time, sprinkle the cinnamon and sugar on top of the dough. Sprinkle cranberries or raisins across the dough.

When you’re done folding, you’ll be left with a square(ish) piece of dough. Just like before.

Next, you’ll proof the dough.

I recommend using the refrigerator to proof the dough overnight.

If your fridge doesn’t have room, you can also proof the dough at room temperature.

A room temperature proof is only a good option if your kitchen is fairly cool (or even cold), because warm temperatures will proof the dough too quickly. Over-proofed dough could result in odd-tasting bread or cause your loaf to deflate in the oven.

The dough is done proofing when you can gently press into the dough with a floured or oiled knuckle and the dough is slow to bounce back.

When your dough is done proofing, turn it out onto your work surface.

Pull the dough into a ball, and let it rest seam-side up for about 15 minutes.

Next, roll the dough into a ball.

Place it on a piece of parchment paper.

If you proofed your bread in the fridge, let it warm up to room temperature for a few hours before baking.

Just before baking, dust your dough with flour.

Cut it with a bread lame or a floured knife. The cuts are meant to help release steam, but they can also be decorative.

Pre-heat the oven while your dough rests.

Place the dough into a Dutch oven and cook covered for 45 minutes.

Next, take the lid off the Dutch oven.

Your loaf should have a nice, round shape and be a pale golden color.

Cook 10 to 15 more minutes, or until a thermometer reads 210 degrees Fahrenheit.

At this point, your loaf should be golden brown.

You must completely cool the bread before cutting into it. I usually leave my loaves on a cooling rack for two hours.

Yes, warm bread straight out of the oven is fantastic! But with an artisan-style sourdough, you have to let the bread cool down before cutting.

Why? Because the bread is still cooking internally, and if you cut it open early your loaf could be under-done and gummy.

Finally, when your bread is cool, slice it open!

I usually warm my sliced sourdough up on a griddle or toaster before serving. Top the bread with a little butter and serve it along with a warm mug of French press coffee. 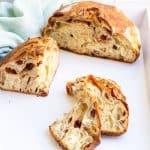