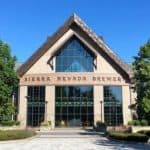 We toured both Sierra Nevada Brewery locations – one in Chico, California, and the other in Mills River, North Carolina. Here’s what we thought of the free tour and the Beer Geek tour!

Tell Me About Sierra Nevada Beer

Sierra Nevada is (as of 2019) the third largest craft beer brewer in the United States.

Their original brewery is in Chico, California, and they recently opened a second brewery in Mills River, North Carolina.

The beer company is named after the Sierra Nevada mountain range, and the brand promotes environmental sustainability and a love of the outdoors.

The Brewery at Chico, California

Last September, the husband and I hopped on a plane and headed to California.

We spent a week visiting his family in Chico before heading to go backpacking in Yosemite, and during that week, we ended up at the Sierra Nevada Brewery twice.

I wish I’d taken photos of the restaurant, and that I more clearly remembered what food we ordered.

I do remember that the restaurant was gorgeous, the vampire fries (garlic fries) were fantastic (I highly recommend them), and I was extra-happy to come back and eat there again a few days later.

We returned to Sierra Nevada with more of my husband’s family, and we did the free brewery tour before eating lunch at the brewery (again).

The free brewery tour was fun– our guide walked us through the main areas of the brewery, and gave us a brief history of Sierra Nevada (and their love of the outdoors).

The highlight of the tour (for me) was when we went into the hops cooler.

Hops are perishable, and the cooler they store them in is COLD, so we didn’t stay long.

But we did get to touch the hops, smell them, and rub them in our hands to make the scent stronger.

Finally, the tour ended and we got to taste the beer!

I got my first sip of their Otra Vez gose (and loved it), but my favorite sample was definitely their Narwhal, a rich imperial stout.

The tour included some souvenir beer glasses (yay!) and more beer samples than I expected.

The free tour in Chico was fun, our guide was friendly (and a little goofy), and we all left happy.

When my husband found out that Sierra Nevada had a brewery near Asheville, North Carolina, he was so excited!

You see, we live in Kentucky, and the California brewery is FAR, far away.

North Carolina is only a few (five) hours away.

And so, when we started planning a trip to the Smoky Mountains, his first thought was – beer. Sierra Nevada beer.

We booked our tour online ahead of time, opting for the three-hour Beer Geek tour.

Want to tour more Asheville area breweries? Check out our review of the New Belgium Brewery For a winery, we recommend Souther Williams Vineyard.

Especially since I’d enjoyed the free tour so much!

It was worth every penny.

Our tour group was wonderfully small (seven people!), and our tour guide Alex started things off perfectly with– beer tastings. At 10:30 am.

If you take this tour make sure to eat before you go!

We tried three different beers (the Pale Ale, Hazy Little Thing, and their stout), and then moved on to start touring the building.

First, we learned about the sustainable building design.

Sierra Nevada’s Mills River location has a platinum LEED certification (which means they’re about as eco-friendly as possible).

I love that they included permeable pavers instead of concrete for the parking area– it allows the rainwater to seep through the aquifer below.

Next, we saw the brewing tanks and tasted both wort and sour wort (liquids from different stages in the brewing process).

Alex showed us the water treatment room, which was more interesting than it sounds!

Alex showed us the different types of malted barley used at Sierra Nevada, and we got to taste them!

Next, we walked to the hops cooler.

Happily, we’d arrived at the very beginning of the United States’ hop harvest season, so the room was PACKED with different varieties of hops.

Just like in Chico, we were able to touch the hops, rub different types of hops in our hands, and smell the differences.

Next, we moved into a room with brewing tanks and pipes, and Alex poured us two different types of beer straight from the tanks.

We walked past (but not into) their science lab, and then into the bottling and packaging area.

Next, we went back to the tasting room and tried more beer.

This time, we started with a few more of their popular beers (including my beloved Narwhal), and then moved onto something extra exciting– beers from their experimental brewery next door.

These beers are not in production, so you can’t buy them (yet? ever?), and it was a pretty cool to get to taste them! We tried a Baltic porter, and a really delicious beer that was aged in a Pappy Van Winkle bourbon barrel.

Finally, we moved downstairs to a barrel aging room next to the restaurant.

Alex gave us our final tasting– the Vintage Bigfoot from their Trip in the Woods series. It was delicious!

The tour was fun, and I really felt like we all learned something. And the tastings were fantastic.

After it was over, we moved on to the restaurant.

We loved both our tours at Sierra Nevada, and plan to go again and do a nature tour!

« Charlies Bunion and the Jump Off
Andrews Bald »