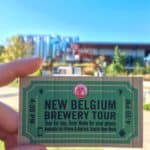 Planning to visit New Belgium Brewery in Asheville, North Carolina? We toured their brewery recently, and here’s what we thought!

Recently, my husband and I traveled to North Carolina to tour the Sierra Nevada Brewery.

And since we’d be near Asheville, NC– a craft beer hub– we decided to double book our beer tasting day and make our trip a fun Asheville, NC getaway.

I booked the Beer Geek tour at Sierra Nevada in the morning, and then a free tour at New Belgium Brewery for later the same day.

In hindsight, this was entirely too much beer tasting for one day. If you’re booking an extensive beer tasting tour like the Beer Geek tour, book any other tours on a different day.

Beer overwhelm aside, we’d booked the tour at New Belgium Brewery and we were determined to have fun!

Tell me about the New Belgium Brewery

They’re the fourth largest craft brewery in the United States (as of 2019), and are known for their Belgium-style beers.

The brewery location was whimsically decorated with bicycles and local art. The atmosphere was extra casual, dog-friendly, and included lots of plastic lawn chairs for lounging outside.

This place is very hipster.

When you arrive, there are two buildings– the one on the right is a tap room and gift shop. It’s also where you checkin for tours.

There was a food truck parked right outside here and plenty of seating (both indoor and outdoor).

The other building (on the left) is the brewery.

Our tour started under the arched New Belgium Brewing sign and moved into a tap room in the brewery.

We sipped on one beer of our choice while our guide told us a little bit about the brewing process.

This room included large brewing tanks, and we could peek inside to see the grains fermenting.

The tour guide talked a lot about the tile mosaics surrounding the basins on the floor– each had its own unique pattern that represented the different phases of beer brewing.

Next, we headed to the most bizarre (fun?) part of the tour.

Yup, our whole group had the chance to slide down a big red slide to go downstairs.

If you’re not into that, there are also stairs and an elevator.

Our tour included lots of local art on display, including several pieces of cattle-inspired artwork.

The location used to be a cattle processing site. The art reflects that.

Next, we moved onto a second tasting.

We tried their Dubbel (a Belgium double ale) and learned about the how the founder was inspired to start the brewery by a trip to Belgium.

Next, we tried my favorite New Belgium beer– La Folie (the folly)– their signature sour ale.

La Folie is a wild sour— a beer that’s allowed to ferment and sour slowly over time.

Next, we walked past New Belgium’s science lab, where they test beer quality and monitor the brewing yeasts.

Our tour ended with a final tasting, where we tasted one of two IPAs from their Voodoo Ranger line.

To conclude, our guide told us more about New Belgium’s 100% employee-owned business model, about the charities New Belgium donates to, and about the bicycles decorating the site.

Because the owners really love bikes. It’s that simple.

Overall, it was a fun (if sometimes bizarre) tour, and was definitely a fun way to spend an afternoon!

« Charlies Bunion and the Jump Off
Andrews Bald »