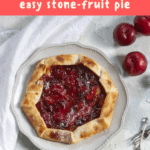 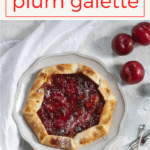 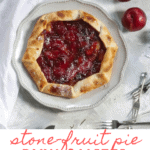 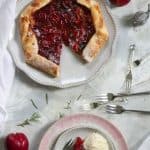 This gorgeous and easy plum galette (plum pie) is a delicious, make-ahead dessert, and the perfect way to use fresh summer and fall plums.

I have a thing for plums.

Awhile back, I decided I should attempt the French dessert plum tarte tatin— which is basically an extra fancy plum upside-down tart.

And then I remembered– I don’t do risky desserts.

I prefer my desserts to be foolproof.

I don’t like for my desserts to live on the edge.

So instead, I decided to use the plum tarte tartin filling, and make it into an easy, no-fail plum galette.

How to Core Plums

Traditional plum tarte tartin uses halved plums– but it can be a little tricky to core a halved plum.

It’s about a billion times easier to core plums by quartering the fruit.

Start by cutting the plum in half along the seam.

Next, cut the half with the pit in half again, and pop out the seed.

If the pit is a little stubborn, and doesn’t want to come out, you can cut the piece in half again.

Need to see plum pitting in action? Check out this video tutorial from Chowhound.

Once you’ve pitted the plums, add them to a pot, and let the plums marinate with some lemon juice, herbs, and spices.

Next, add a little butter, and begin cooking down the plums.

The plum sauce will turn bright red, and then begin to thicken.

How to Make a Plum Galette

Once the filling thickens, let it cool.

Then, add it to the middle of a sheet of pie dough.

I use pre-made pie dough, because it makes my life easier.

Fold the dough around the filling, and then brush the dough with a beaten egg.

Bake the plum galette until the crust is golden and gorgeous, and then set the galette aside to cool.

This plum galette is slightly tart (like a rhubarb pie), and goes perfectly with a sweet scoop of ice cream. 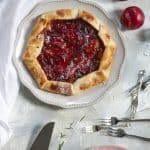