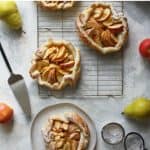 This vegan apple crostata (or galette) is an easy alternative to apple pie, and is made with puff pastry, apples, pears, and a quick orange glaze.

Do you ever have leftover puff pastry?

And this is a perfect way to use that leftover puff.  Because it’s delicious, but also because you probably already have all or most of the other ingredients on hand.

What is a Crostata?

A crostata is an Italian pastry that’s a cross between a tart and a pie.  If you’ve heard of the French galette— they’re basically the same thing.

Both the crostata and the galette are baked outside of a pan or mold, and are made by wrapping dough around the filling.

They’re meant to look rustic, so you don’t have to worry about adding extra decoration like on a pie.

Although you certainly could if you want to.

Why Use Puff Pastry Instead of Pie Dough?

Plus, I like the light and flaky texture of the puff here.  It’s a nice contrast to the texture of the fruit, which will still have a little bite, and won’t be fully softened.

What Kind of Apples Should I Use for Apple Crostata?

Use whatever apples you have on hand!  I used pink lady, but these would also be perfect with gala or honeycrisp.

Can I Make This Apple Crostata Ahead of Time?

This pastry is best eaten within a few hours of baking.

Puff pastry doesn’t hold well, and will become soggy as it sits after baking.  Since the apples and other fruit will all begin to brown after you cut them, I recommend making this apple crostata right before you want to eat it.

How to Make an Apple Crostata

Start by cutting a piece of puff pastry in half.

Next, divide a diced pear (or a diced apple, or a diced quince) into the center of both pieces of puff pastry.

Slice an apple thinly, and then fan the apple slices over all the diced fruit.

Next, begin wrapping the galettes.

Gently fold the puff up around the fruit, making creases as you go around the circle.

When you finish, rub the puff to make it smooth.

Brush the dough with a non-dairy milk, and sprinkle with sugar. Slide the apple crostata into the oven, and bake until golden.

While the puff bakes, whisk together a little orange marmalade with some lemon juice. Heat the jam and lemon juice mixture on the stovetop.

When the puff is golden, take the apple crostata out of the oven, and drizzle the orange marmalade glaze over the fruit.

Dig into an apple crostata while it’s still warm! 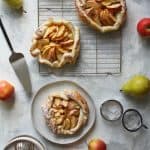 This recipe makes 2 small crostatas, but is easily multiplied. Nutrition information assumes ½ crostata per serving, and does not include optional milk wash or powdered sugar.