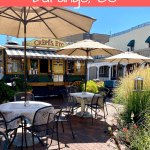 Michel’s Corner Crêpes is an exceptional food truck in downtown Durango, Colorado, that sells both savory and sweet crêpes.

Years ago, just after we were first married, my husband and I visited Durango, Colorado, on a road trip.

He’d planned most of the trip, and he was extra excited about one of the food destinations on our route — Michel’s Corner, a French crêpe food truck.

On our first visit to Michel’s Corner, we ordered a smoked salmon crêpe, and I remember being delighted when I realized the chef’s assistant was cutting fresh herbs from the garden for our crêpe.

Chef Michel’s crêpes did not disappoint. After just one bite, I was dreaming of the crêpes I ate in Paris.

I’ve been dreaming about Michel’s crêpes ever since.

This past fall, when we set out on another trip to Colorado, we both knew that we’d need to revisit Michel’s Corner. Once again, it was spectacular.

If you’re planning a visit, find out more about their hours (and address) here.

Are you dreaming of crêpes but can’t make it to Michel’s as often as you’d like? Try making your own French Crêpes (or gluten-free crêpes, or vegan crêpes) at home! We also love these smoked salmon crêpes, strawberry crêpes and chocolate crêpe cake.

This little food truck offers both savory and sweet crêpes, and I made it my mission to taste as many of them as possible.

Except, I needed to revisit that smoked salmon crêpe that I had on the first visit. Newsflash — it was still phenomenal.

After ordering, we took a seat at one of the tables, and admired the chef Michel’s garden.

At Michel’s, seating is at outdoor tables on the garden patio. The plants closest to the food cart are edible flowers and herbs that are used in or on the crepes.

On this visit, we enjoyed a smoked salmon crêpe and a chicken and wild mushroom crêpe, along with a glass of wine.

It all felt so fancy.

I heard a few others order the smoked salmon crêpe while we waited – it must be popular. Both types we tried were among the best crêpes I’ve ever eaten.

The chef is close at hand in the food truck, and both times he was incredibly friendly and helpful.

Once we’d finished our savories, chef Michel sent out our dessert crêpe, made with Grand Marnier.

He wanted to make sure that the whipped cream on top didn’t melt, so he waited and then sent it out right on time. What service!

This dessert crêpe carried just the right amount of sweetness, with hints of orange.

We were so determined to try more of Michel’s crêpes that we came back a second time.

It had to be done.

We visited again on a busy Saturday morning, and this time we had to wait just a little bit longer, and our dessert crêpe came out at the same time as our savory crêpes.

So on a weekend, plan to wait just a little bit longer — and maybe eat dessert first to fully enjoy that whipped cream. It will be totally worth it!

This time we tried a turkey lingonberry crêpe and a tomato basil mozzarella crêpe. Both were fabulous!

For dessert, we had a lemon cream crêpe. It was also fantastic (not overly sweet, which is good with me) with a perfect amount of tart lemon flavor.

If you’re in Durango, Colorado, make sure to fit in a visit to Michel’s Corner!