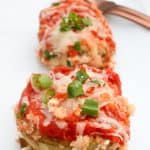 This easy Baked Eggplant Parmesan is a lightened-up version of the original fried Italian casserole, and is perfect for both weeknight dinners and Date Night!

There’s a little Italian restaurant close to where the husband’s parents live, and every single time we go, the server hears something like this:

“I’ll have the Eggplant Parmesan without the pasta.”

“I’ll have the Eggplant Parmesan with penne.”

“I’ll have the Eggplant Parmesan but I’m sharing with him.”

We are predictable people.

As tasty as this fried veggie concoction is, when I make it at home, I try to make it healthier.  This Baked Eggplant Parmesan has less grease, and lets the eggplant shine through.

Do I Really Have to Peel the Eggplant?

No, but the skin will toughen while you bake it.  So, if you don’t peel your eggplant, there’s a decent chance that you’ll need a knife to cut through it when you’re eating.

This might not be a big deal, but it also seems to toughen even more if you’re reheating leftover Eggplant Parmesan.  So, if you– like me– tend to bring leftovers to work for lunch, and also regularly forget to pack a table knife, you could find yourself wishing you’d peeled that eggplant.

You have been warned.

How Do You Sweat the Eggplant?  Can I Skip That Part?

As hilarious as it would be, sweating an eggplant doesn’t involve making the vegetables run around the park, or even cranking the heat up in your house.

Instead, you sprinkle salt on your sliced eggplant, set the slices in a colander with a towel over the top, and walk away.

I highly, highly recommend sweating the eggplant.  Since you’ll be baking the eggplant, you want to get as much moisture out as possible to make sure they crisp up in the oven.

How to Make Baked Eggplant Parmesan

To make this baked Eggplant Parmesan, dip the (pre-sweated) eggplant slices in a beaten egg, and then into a breadcrumb and Parmesan cheese mixture.

Toast the slices until the breadcrumbs are golden and the eggplant has cooked through.

I like to “taste test” one of the eggplant slices at this point, just to make sure they’re crispy enough.

Bake the casserole for about 20 minutes, and then serve it with pasta, bread, or a green salad. 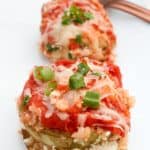