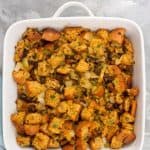 I did not grow up eating stuffing.

If stuffing (or dressing) was on the menu, it always– ALWAYS– lost out to mashed potatoes.  (Even as a child, I only wanted one carb-licious item per meal.)

And then I got married.

And my husband’s eyes light up at the mention of stuffing.

When boxes of pre-made stuffing begin to be featured in tall pyramids in grocery stores each fall, they also begin mysteriously showing up in my pantry– stocked by a carb-eager hubbie.

And so, when my friend Cynthia mentioned that she was making her grandmother’s oyster stuffing— I knew I needed the recipe!

This is her family recipe– with a few adjustments.

I also checked in with my friend Amanda– the stuffing-master over at Striped Spatula— for help when the family recipe was unclear.

The biggest change I made to her family recipe was to swap fresh oysters for tinned smoked oysters.

Mostly because fresh oysters are almost impossible to find where I live.  And if I can find them– they’re pricey.

If you have easy access to fresh oysters, check the recipe card notes for directions on how to use them.

I used a country Italian loaf– which is a fancy way to say I used a whole wheat Italian loaf.

You could also use a white Italian loaf, a French loaf, or cornbread.

Can I Add Extra Veggies?

If you want fluffy stuffing, I don’t recommend adding more than the recipe calls for.

If there are too many add-ins, they don’t incorporate well, and you’ll end up with heavy pockets of veggies.

Can I Cook this Inside a Bird?

I’m not sure if you’ve noticed, but we don’t cook a lot of poultry around here!

Can I Make This Ahead of Time?

How to Make Smoked Oyster Stuffing

Start by toasting some bread in the oven.

Cook it until it feels dry to the touch (about 10 minutes).

While the bread toasts, cook onions and celery along with some spices.

Cook the veggies until the onions softens.

Next, add the bread cubes and the cooked veggies, along with smoked oysters, an egg, and some herbs to a mixing bowl.

Slowly pour broth into the mixture, and stir until the bread absorbs the broth.

Finally, transfer the stuffing mixture into a casserole dish and bake the oyster stuffing until it’s golden.

Serve this stuffing with some bourbon cranberry sauce and honey balsamic brussels sprouts, and enjoy!

This recipe serves 6 as a side dish, but is easily doubled.  If doubling, use a lasagna pan instead of an 8×8 casserole dish. Recipe Variations: