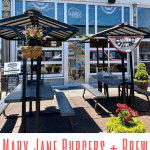 Mary Jane Burgers and Brew is a family-owned Missouri spot that’s known for craft burgers, beers and cocktails. This is a local top-pick!

Last summer, we ended up in the Saint Louis area, and had a chance to meet some friends for lunch on our way home.

While we were trying to pick a spot to meet, something funny happened.

First, on our own, we Googled and were thinking about going to Mary Jane Burgers and Brew in Perryville, Missouri. Next, someone we talked to in Saint Louis recommended Mary Jane (without prompting).

The message seemed clear. We had to meet our friends at Mary Jane. Received and understood.

This also meant that I had somewhat high expectations for this lunch!

It turns out that my favorite part of the lunch was getting back in touch with old friends, but the lunch itself was also pretty delicious.

When we arrived, we opted for the outdoor seating. It was covered and the weather was nice.

There was also plenty of indoor seating available, both at tables and at the bar.

When we visited, the menu was completely digital. The tables had a QR code to scan. You can also view the menu online here.

I ordered the blackened salmon sandwich. Yes, I’m the one who goes to a burger spot and orders fish. (I’m not a beef fan.)

The fish sandwich was pretty fabulous, and I liked that it was an entire fillet on a bun (instead of a salmon patty). It reminded me of the salmon sandwich I make at home (which I was happy about).

The rest of our group ordered the steakhouse burger, the Monk burger and a chicken quesadilla.

Excitingly, the Monk burger was topped with fried onion rings.

The burgers came with unlimited fries! So there were plenty to share between us.

If you’ll be in the Perryville area, stopping at Mary Jane Burgers and Brew is a must! Take it from me — and all the other people I heard it from first.