This venison lentil stew is made with ground deer meat, red lentils, tomatoes and spinach. Make it in the Instant Pot, slow cooker or stovetop!

When a friend gave us some venison recently, the very first thing we did with it was make venison chili.

With the lean, firm meat, the savory seasoning, and addition of beans, peppers, and beer, it was a perfect combination.

But then I started thinking about what other kind of stew would be delicious with venison. And the campfire red lentil stew that I make sprang to mind.

It was a recipe that translated well when I made it with fish, so I thought, why not adapt it to meat as well? And since we can’t always be outside cooking over a campfire (unfortunately), this time I used an Instant Pot.

Don’t have an Instant Pot? No worries: it’s also easy to prepare in a slow cooker or on the stovetop!

This stew features ground deer meat, red lentils, tomatoes, and spinach, and simmers until the meat is tender. It’s ready in about 40 minutes!

Deer meat has a reputation for having a strong or gamey flavor.

And while that can be true (depending on how it was processed), it’s not always the case.

At any rate, the seasonings in this stew and the acidity of the tomatoes can help to balance out any strong flavor in the meat! So don’t hesitate to try it if you’ve got some on hand.

Venison is a rather lean and firm meat. If you need to swap in some other type of meat, ground turkey would be a good option.

How to Make Venison Lentil Stew

If you’re using an Instant Pot, start by adding oil. Press the sauté button and adjust the temperature to normal.

If you’re preparing this stew on the stovetop, add oil to a large pot over medium-high heat. (If you prefer to use a slow cooker, check the recipe card for notes.)

Then add the onions, venison, and spices. Let them cook until the onions are soft and the meat is beginning to brown.

Next, add tomatoes and cook the mixture for 2 or 3 minutes, until it comes to a gentle simmer.

Next, add lentils and water.

Now is a good time to scrape around the bottom of the pan to check for any food bits that have gotten stuck.

Add the spinach, and let it cook until wilted. Give it an occasional stir as it’s cooking.

Spinach takes up a lot of room in the pot before it cooks down, so add it in small batches as needed until you can fit it all in!

If you’re cooking on the stovetop, simply cover the stew now and let it simmer on low heat for about 30 minutes.

If you’re using the Instant Pot, press the ‘cancel’ button. The next step is to pressure cook the stew.

After 5 or 10 minutes, the Instant Pot will come to pressure. At that point you’ll see it start to count down the cooking time.

When it beeps to indicate it is finished, do a quick-release of the pressure. To do this, use a long-handled implement like a wooden spoon to turn the valve.

The spinach will probably all be at the top of the stew, so give it a good stir to blend everything together.

Then serve your venison lentil stew while it’s hot. (Maybe with some warm, buttery slices of sourdough bread.) Dig in, and enjoy! 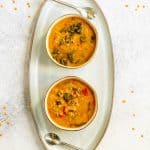