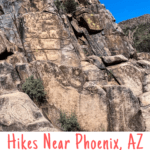 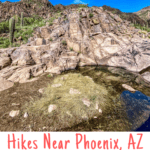 Looking for hiking trails near Phoenix, Arizona? Check out the Hieroglyphic Trail next to Lost Dutchman State Park. This gorgeous trail takes you into the Superstition Mountain Wilderness for a view of historic petroglyphs.

Last week, the husband and I went on a winter hiking trip to southern Arizona.

You know, where they don’t actually have winter.

When we arrived, we hiked Camelback Mountain, and then headed east to our camping site at Lost Dutchman State Park. Once we arrived, we knew we wanted to hike the Siphon Draw Trail, but otherwise, we had no plans.

The park rangers at Lost Dutchman helped us find a few trails, and the next day we headed to Silly Mountain and this Hieroglyphic Trail.

Looking for more trails in the area? Check out the Treasure Loop Trail in Lost Dutchman State Park.

A few times while looking at trail maps, I saw the phrase “petroglyphs at the end of the hieroglyphic trail.”

And it made me wonder, what is the difference between hieroglyphs and petroglyphs?

Hieroglyphs are Egyptian symbols intended to represent words or letters. In other words, hieroglyphs are a form of writing, and with some training and a key, you could learn how to read hieroglyphs.

Petroglyphs are also symbols used by ancient peoples and are carved into rock. Unlike hieroglyphs, reading petroglyphs isn’t as simple as learning a key, because the symbols mean different things depending on who drew them.

I think of hieroglyphics as written expression and petroglyphs as visual expression.

So, to be technically correct you could say that there are petroglyphs (not hieroglyphs) at the end of the Hieroglyphic Trail. And even though I don’t normally search out Native American (Indian) ruins, these were pretty neat.

Believe it or not, back in the days before Champagne Tastes, I used to teach an art education class at the local university. Yup, I sure did.

And the answer to that question depends on who you ask and how politically correct you want to be. The school-of-thought that made most sense to me is this–

If the person (or artist) who created the petroglyphs intended them to be art, they’re art.

On the other hand, if they were created as part of a non-artistic expression, then the petroglyphs are artifacts.

But, what does this all mean for you and your hike?

It means that, even though there are no ropes blocking off the petroglyphs at the end of the trail, treat them with respect as art (or artifacts) from the past.

And yes, I did notice that some of the petroglyphs looked a little newer and sharper than others. Don’t draw new petroglyphs on the rock.

Where is the Hieroglyphic Trail?

This trail is about 45 miles east of Phoenix and 15 miles south of Lost Dutchman State Park in Gold Canyon, Arizona.

The town seems to love its hiking trails, because when you’re within a mile or two of the trailhead there are Trail! ➜ signs everywhere. It was sweet.

How Hard is the Hieroglyphic Trail?

This is a moderate 2.8-mile out-and-back trail.

The first half of the trail is pretty easy, to the point that I was questioning why the park service rated the trail as moderate, but the terrain does get a little rougher near the end of the trail.

To reach the end of the trail, you’ll have to navigate your way over a large boulder.

Where Should I Park?

Okay, so it’s pretty obvious that you should park in the trailhead parking lot, right?

This is a SUPER popular trail, and sometimes the parking lot will run out of spaces. You might be tempted to park on the street.

There are signs EVERYWHERE warning you that the city will tow your car if you park illegally. If the lot is full, just wait a few minutes until a spot opens up.

And here’s the other thing. There are no lines on the parking lot, and people kind of make their own spots.

There’s room for three rows of cars comfortably. If you need to park creatively, just make sure you aren’t blocking in anyone’s car. Don’t be that person.

Start at the Lost Goldmine Trailhead.

You’ll have to pass through a metal cattle-gate; simply open and close it.

Soon you’ll reach a sign for the Hieroglyphic Trail.

When you reach the Lost Gold Mine and Hieroglyphic trail junction, follow the signs for the Hieroglyphic Trail.

You’ll take the trail on the left.

This trail starts off fairly flat and easy.

And it stays that way for a long time.

When you come to the second cattle-gate, open it and go through, and make sure to wrap the chain back around the fence. I’m not sure if they’re keeping cows in or out.

As you hike, admire the Saguaro cacti (the tall cacti with arms that look like a cactus emoji) in the fields around the trail.

You’ll see the mountains getting closer and closer.

Near the end of the trail, things start to get rockier.

The trail becomes more difficult, and I was happy that I brought along a trekking pole.

When you’re almost to the end of the trail, you’ll have to climb over a large rock. And then, you’re there.

At an oasis in the desert.

The large rock surrounding the pool of water is, quite literally, covered in petroglyphs.

This is a perfect spot to take a break, eat a snack (or your lunch), and enjoy the petroglyphs and scenery.

If you want, you can explore the area even more, and climb higher past (or above) the petroglyphs.

It was chilly when we were here in February, but on a warmer day I would’ve dipped my toes in the water.

Take your time here, enjoy, and when you’re ready, turn around and head back the way you came.