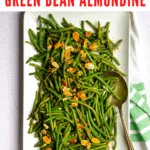 This easy green bean almondine (or amandine) is made with fresh or frozen beans cooked in butter and topped with toasted almonds. This veggie side dish is based on Julia Child’s buttered green beans.

I’m growing green beans in my garden this fall.

I’ve never grown them before, but so far they look pretty happy!

My friend Sally suggested growing green beans for a fall harvest, and assured me that green beans are (usually) an easy, low-maintenance plant. So far she’s 100% correct, and it’s been a nice break from my higher-maintenance tomato plants.

But guys, just because I have green beans growing in the garden doesn’t mean that I could possibly resist the gorgeous French green beans (haricots verts) I found at Trader Joe’s.

Since the beans were French, I decided to let Julia Child tell me how to prepare them. It seemed like the right thing to do.

While I was preparing the beans à la Julia, I started thinking about green bean almondine (or amandine), and I decided to adapt Julia’s recipe for buttered green beans by topping them with buttery, toasted almonds.

I can’t be sure, but I think Julia would approve.

If you want to check out Julia’s original recipe (without my adjustments), you’ll find her recipe for haricots verts à la Maitre d’hôtel (buttered green beans II with lemon juice) in Mastering the Art of French Cooking, Volume I.

What Is Almondine (or Amandine)?

Almondine is a culinary term that refers to an almond garnish. The almonds are usually buttered or seasoned.

French cookbooks usually use the term amandine, and American cookbooks say almondine. Either is correct.

You can even prepare it with fish, as in salmon almondine, trout almondine, or whitefish almondine.

Do I Have to Use French Green Beans?

They also look really attractive on a serving platter.

If you’re looking for French green beans, I regularly see them at Trader Joe’s. Depending on the time of year, you’ll see fresh beans with the chilled produce, and you can usually find them frozen (no matter the time of year).

That said, regular green beans will work well in this recipe.

Should I Use Fresh or Frozen Green Beans?

That is entirely up to you.

Fresh green beans will have slightly more texture, and they’ll blister in the hot, buttery pan (making them extra delicious).

Frozen green beans will be faster to prepare (since they’re already trimmed), and might be easier to have on hand.

Either way, this recipe is delicious. The beans in the photos were frozen beans, and I think they look (and tasted) fabulous!

Can I Use Canned Green Beans?

That said, if you want to try using canned beans, skip the blanching part of the recipe entirely. You’ll want to start with the recipe card heading “make the green bean almondine” (the part where you toast the almonds and then cook the beans in butter).

If you use canned beans, do not expect this green bean dish to look as fresh or vibrant.

First, bring a large pot of salted water to a rolling boil.

Add the green beans and blanch them two to three minutes or until they’re bright green.

Quickly remove the beans from the pan, and either spray them off with very cold water or submerge them in an ice bath.

Pat the beans dry, and set them aside.

Next, melt butter in a large, heavy pan. I used a Lodge 12″ carbon steel skillet.

When the butter melts, add the almonds.

The almonds will quickly begin to toast in the butter.

As soon as they turn golden, scoop them out of the pan, leaving as much butter behind as possible.

Next, add a little oil to the pan and increase the heat. The oil will keep the butter from smoking.

Add the green beans to the pan, and cook over medium-high heat for five to seven minutes.

The beans are done when they’ve begun to soak up the butter and (if you used fresh beans) they’ll begin to char.

If you used frozen beans, simply taste a bean after about five minutes to see if they’re tender. The beans should be tender but still firm.

In Julia’s version, she cooks the beans for eight minutes in boiling water, and then only leaves them in the hot pan for a moment or two. I adjusted the times because I love how the beans taste when they cook in the butter longer!

How to Serve Green Bean Almondine

At this point, you have two options.

You can sprinkle the almonds over the beans and serve the beans straight from the pan.

This is how I serve green bean almondine if I’m plating all the food before carrying it to the table, because… why dirty another dish?

The other option is to use a serving platter.

If you’re using a platter, scoop the beans onto the platter and then sprinkle the buttered almonds over the beans.

Serve the green bean almondine right away while it’s still hot, along with this easy broiled halibut and French mashed potatoes. 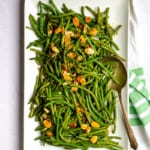