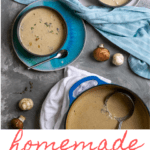 This homemade cream of mushroom soup is a warming, gluten-free soup made with fresh mushrooms, leeks, herbs, milk, and cream.

A few weeks ago, I decided to remake one of my favorite recipes, homemade cream of mushroom soup.

I originally posted this recipe for cream of mushroom soup (with a dried mushroom base) back in January 2017. Back then, dried mushrooms were SO EASY to find.

Guys, I don’t know what happened. In the past three years, dried mushrooms have (seemingly) vanished from grocery stores.

And the dried mushrooms I found online were pricey.

At first, I thought I would simply satisfy my soup cravings with some of my other favorite soups, like this vegan tortilla soup and this vegan split pea soup.

But it really annoyed me that I couldn’t find dried mushrooms!

I decided it was time to revise this recipe using easy-to-find and affordable mushrooms.

What Kind of Mushrooms Should I Use?

I used baby portobello mushrooms, but you could use white button mushrooms, wild mushrooms, or a combination of whatever mushrooms you have on hand.

Because you can really taste the mushrooms in this soup, it’s an excellent way to use wild mushrooms and showcase their flavors.

How Do I Clean Mushrooms?

Mushrooms absorb a lot of water.

If you rinse your mushrooms off, the extra water will make them more difficult to brown in the pot later.

You’ll end up with mushy mushrooms.

Instead of rinsing your mushrooms, simply use a crumpled towel or a dry pastry brush to brush off any dirt from the mushrooms.

If skipping the rinse worries you, know that store-bought mushrooms are generally grown in sterilized compost, so it’s not dirt that should make you sick.

If you’re using foraged wild mushrooms, brush a little more carefully to get rid of debris (like pine needles).

Can I Freeze This Homemade Cream of Mushroom Soup for Later?

You can cook the recipe part-way (stopping just before you add the milk), freeze the partially prepared soup, and then thaw it when you’re ready to use.

When you’re ready, continue cooking where you left off!

My original version of this recipe included diced asparagus.

I’ve decided to skip it in this version, because I want this soup most often in the middle of winter, when asparagus is not in season.

However, asparagus (or peas, or fresh spinach) are delicious additions to this soup.

Add the veggies (either cooked or raw) as you’re finishing up the soup, and continue cooking until they’re warm.

Cook them until they’re fragrant and brown.

Scoop the mushrooms out of the pot, and save them for later.

Add a little more butter, some sliced leeks, herbs, and salt. Cook until the leeks are softened.

Pour in a little white wine, and bring it to a simmer.

Next, add the broth and the reserved mushrooms.

I like to use mushroom broth (preferably homemade), but homemade vegetable broth will work perfectly too.

In a small bowl (or a measuring cup), whisk together a little cornstarch and milk.

Pour it into the soup, and add more milk to the pot.

Next, scoop about half the soup into a blender along with some Parmesan cheese.

Blend until the soup is creamy, and pour it back in the pot. Finally, stir in the cream.

Serve this homemade cream of mushroom soup while it’s still hot, and enjoy digging into this delicious, indulgent soup. 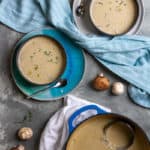 To Freeze + Use Later: Follow the recipe through step 4, and stop.  Freeze as a soup base, and use within 12 months.  To use, thaw heat to a simmer, and continue at step 5. Recipe variations:  Add diced asparagus, fresh spinach, or peas to the soup just before serving, and heat until warmed through.