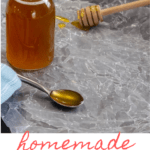 This homemade cough syrup uses bourbon (or whiskey), raw honey, and apple cider vinegar for an easy tonic. Use it to soothe a sore throat and calm a cough!

There is no cure for the common cold. This recipe is intended to help soothe cold symptoms, but is not medical advice.

I’ve ducked, I’ve dodged, but it caught up to me.

It is…. cold and flu season.

Are you still healthy, and are trying desperately to stay that way?

If however, you’re feeling under the weather, I feel your pain.

I spent a full day ignoring my sore throat and kept trying to convince myself I simply had allergies.

Eventually, I admitted I had a cold, and made a batch of my caramelized onion and garlic “get well soup.”

Sadly, even after I started feeling better, my cough did not go away.

And guys, it’s hard to sleep when you keep waking yourself up coughing.

Just as I was considering driving to the store and buying a bottle of cough syrup, I remembered something.

My version swaps the water for bourbon. Although you could certainly use water instead of bourbon if that’s what you prefer.

Homemade bourbon cough syrup is not thick like store-bought cough syrup, but it is tastier! It’s also quick, and uses ingredients you probably already have in your pantry.

Apple cider vinegar (ACV) is made by fermenting apples. That means it’s filled with healing probiotics, and it’s thought to help thin mucus.

You have to buy organic apple cider vinegar with the mother. Braggs is a common high-quality ACV brand that’s easy to find, but I also like Simple Truth Organic ACV.

The mother is the healthy bacteria in the vinegar. It’s the brown stringy bits that you’ll see in the bottle.

The vinegar mother is similar to a kombucha SCOBY.

Why Use Raw Honey?

Do you have a jar of local raw honey with the honeycomb still in it? A jar that you bought on a whim, and then didn’t know what to do with?

This is the perfect way to use it.

Raw honey is not pasteurized or processed before bottling, meaning it (in theory) has more nutrients, antioxidants, and vitamins than processed honey.

That said, if all you have is regular processed honey, go ahead and use it. It will still help coat and soothe your sore throat.

Processed honey just won’t be quite as nutrient-rich as raw honey.

I’ll tell you why!

It’s the same reason that you add bourbon (or another liquor) to a hot toddy.

The bourbon will help you fall asleep. And without sleep, it’s pretty difficult to recover from a cold.

I prefer bourbon over a lot of other liquors because bourbon doesn’t have any additives (like “natural” or artificial flavors, food coloring, or sweeteners).

If you prefer a different spirit, or if you’re out of bourbon but have cinnamon whiskey in your cabinet, go ahead and use what you have on hand!

And of course, if you want to make this a more kid-friendly homemade cough syrup, you can swap the bourbon for water. Just make sure not to give honey to babies.

I like to use a mini Ball jar (one that has the measurements on the side of the jar), and pour everything straight into the jar. That way I don’t need to get a measuring cup dirty, and also it’s annoying scraping honey out of a measuring cup or spoon.

If you don’t have a jar with a lid, you can also use a measuring cup, stir everything together, and then store the syrup in a glass container.

Add two ounces of honey to the jar.

And then of course, add the apple cider vinegar.

Shake until the honey is incorporated into the liquid.

Leave the syrup in a glass jar, or pour it into a bottle and give it to a sick friend as a get well gift.

Store the syrup in the fridge, and drink a spoonful of this bourbon cough syrup whenever your throat hurts or you’re coughing.

Nonalcoholic version:  Use 2 oz water instead of bourbon.  The shelf life of the syrup will be shorter (about 2 weeks).  Flavoring Options:
– Add a dash of ground cinnamon an/or ginger to the syrup before shaking.
– Add a cinnamon stick to the jar, and allow the cinnamon to infuse into the bourbon until you’re happy with the flavor (infuse from about 1 day – 1 week)
– Use flavored whiskey or flavored honey