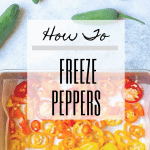 Want to preserve your summer peppers to use all year long? This tutorial will walk you through how to freeze peppers (whole or cut).

We had so many hot peppers this year.

We had peppers from our own garden, and we had them gifted from friends. And then there was the time I was walking down our street and a neighbor offered us extra peppers from his garden!

Really, we had almost too many peppers. If that’s a thing.

Not that I’m complaining! Hot peppers are the best. I’ve made plenty of hot sauce, as well as the (easier) alternative, hot pepper vinegar.

And there’s always salsa: fire-roasted or mango habanero. Or you can throw them in soup for an extra kick, such as in this vegan tortilla soup.

But after all those avenues had been explored and we still had hot peppers hanging around the kitchen, I opted to freeze some.

Frozen peppers will still work in all the traditional recipes, so extending their usable life in this way is a great idea. Frozen whole peppers aren’t even super hard to cut if you have a sharp knife.

Are you in a time crunch and just want to freeze your hot peppers whole?

It’s super easy, no preparation needed. Just rinse and dry them; then toss them in the freezer! Make sure to use a container or bag that’s freezer-safe.

You can do the slicing and dicing later on when you’re ready to use them in a dish.

How to Freeze Cut Peppers

Cutting your peppers before freezing them will save a little time later on when you’re ready to use them.

You just need to add one extra step: freeze the cut peppers in a single layer before you bag them as usual.

This is because all the little segments tend to freeze together in a clump that’s difficult to work with if you don’t freeze them individually to begin with.

So, after making sure they’re clean and dry, slice the peppers and spread them out on a baking sheet.

Pop the baking sheet into the freezer for about 30 minutes.

Then remove the tray, collect the peppers into a freezer bag or other container, and place back into the freezer until you’re ready to use.

Problem solved! All the garden goodness will be right there in the freezer waiting for you the next time you need it. 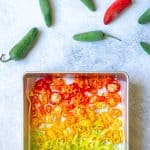 How to Freeze Peppers

Cost: $3 (or free from garden)
Prevent your screen from going dark

Recipe amounts approximate.  Yield will vary based on how many peppers are used.