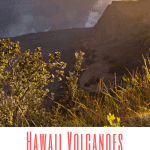 Visit Hawaii Volcanoes National Park to see craters, mountains, and ocean views. Plus, stay around to watch the lava flow after dark!

By Nicole McKinney of Tea on the Trail

The beautiful island of Hawaii. Sunshine, beach, and tourist scene – it’s all fantastic.

But maybe you want more. You want adventure!

Towering above you is the answer: those luscious tropical mountains are actually four active volcanoes!

Kīlauea and Mauna Loa are part of the Hawaiian Volcanoes National Park, which takes in 500 square miles on the southern side of the “Big Island.”

The other two peaks, Mauna Kea and Hualālai, are a couple of hours further north.

With just a little preparation, a day from your tropical itinerary can turn into an adventure you can’t get anywhere else in the United States.

Seeking more national park adventure? Check out our posts on backpacking in Denali, hiking Yosemite’s Half Dome, or getting to the bottom of the Grand Canyon!

Every minute during vacation is precious. So let me share a few things I learned during my visit to Hawaiian Volcanoes National Park to help you make the most of your time there.

This excursion focuses on Kīlauea, which was the only volcano erupting during our visit. (It tends to be pretty active!)

Information is current as of January 2022. Check the park website for up-to-date announcements.

I recommend planning a generous amount of time to explore the park. Trust me: you won’t run out of things to see!

It’s true, you could squeeze in a quick sight-seeing drive from the resort up to the mountain, and yes, you’re going to see beautiful, lush and mysterious scenery that way – but, if you’re interested, there’s lots more to experience!

The drive itself takes some time. One way, it’s at least 45 minutes from Hilo, 2 hours from Waikoloa, and 2.5 hours from Kona. Try to allow a full day, or as much as you can.

Ridesharing is not a good option for this excursion. According to the park service, rideshare companies will often not come to the park for pickup, and access to rideshare apps can be very limited within the park.

We stayed in Kona. The drive to the park via Hawaii Belt Road was spectacular!

The road passes through old Hawaii towns and operational coffee plantations along the way. Climbing closer to the park, the road involves steep mountain switchbacks, with ocean scenery far below.

On the way home, it was late at night and we were tired. So we chose the much easier but slightly longer drive by way of Waimea and Hilo, via Saddle Road and the northern part of Hawaii Belt Road.

Want to skip the extra driving and stay in a hotel overlooking the crater? Then try Volcano House, located within the park.

The road crosses vast lava fields, and we were so curious about them. Did this eruption happen during our lifetime? Was this a video we saw on the news? You can look up historic eruptions and compare them with your own explorations.

At the entrance to Hawaii Volcanoes National Park, we paid $35 per vehicle. The pass is valid for 7 days.

Want to streamline things a bit? Buy your pass online before you go!

The first thing you’ll come to is the visitor center and exhibits, which were closed due to current restrictions when we were there.

The bookstore, however, was open! There, we found trail guide books, which added a lot of color and context to our exploring. We also bought rain ponchos, which soon became invaluable!

National Geographic makes a map of Hawaii Volcanoes National Park, if you want to buy one in advance!

Rangers and aides were available at the lanai, the porch outside the restrooms. They can answer questions and tell you minute by minute what activity is happening in the crater.

We were pretty excited to discover that some swelling had been noted for about 30 minutes before our arrival, so chances were excellent for viewing lava activity, especially after dark.

For a little volcano history as well as current eruption information, check out the U.S. Geological Survey. Their Kilauea map tracks earthquakes in real time. You may not even realize they are happening while you are there!

From the visitor center, we took Crater Rim Drive.

Crater Rim Drive is now a broken loop. Volcanic eruptions several years ago closed the middle portion of the road, but some of it is open to foot traffic.

On the section that remains open to vehicles, you can drive from the visitor center to Kīlauea Overlook in just a couple of miles.

As you drive, keep an eye out for the nēnē, the endangered Hawaiian goose. Only about 3,500 still exist, and 165 reside in the park. So be sure to drive slowly to keep the geese safe!

First, we came to Ha’akulamanu (Sulphur Banks), where hot volcanic gases rise out of colorful, rocky terrain. You can check it out via an easy stroll on an elevated boardwalk.

Next up were the Steam Vents, where ground water meets magma-heated rock and vaporizes back to the surface.

The brochure suggests 1-2 hours just to hike and explore this area.

Next, there was a military camp on our right, and then we came to the Kīlauea Overlook on the left. Note: There are restrooms here.

The crater stretched out below us. We understood immediately why we were told to dress warm! The wind was intense, and it was bitterly cold!

The weather cycled every few minutes. Mist – or even a downpour – could be quickly followed by beautiful sunshine. Then, the next minute, a rainbow coming right out of the crater!

While you’re at the overlook, be sure to notice the unique plant life that thrives in these unusual conditions, like the pūkiawe shrub pictured below. It bears fruit that the nēnē can eat (but which humans can’t).

We couldn’t see the lava flow itself from this vantage point, but the plume of steam showed us exactly where it was.

Finding it was the next part of the adventure.

Watching the Lava After Dark

Shortly before dusk, we took Crater Rim Drive in the opposite direction, toward Chain of Craters Road.

The plan was to see the lava from Keanakako’i Overlook after dark, when it would be more easily visible.

The Keanakako’i Overlook parking was full, so we parked at the Pu’upua’i Overlook.

This added a half-mile paved hike on Devastation Trail, which was really interesting. It’s an area that was devastated by a 1959 eruption (hence the name!) but which is now gradually returning to life.

I wished we had come just a bit earlier to see this area in the daylight. As it was, a beautiful glow from the lava filled the sky like a sunset.

The trail brought us to the parking lot for Keanakako’i Overlook, from which we still had one mile to walk.

Note: there are portable restrooms at the parking lot.

The “trail” is actually Old Crater Rim Drive, the section of the road which had been damaged by previous eruptions.

The road is black-topped and easy for walking; however, there were no lights. So some sort of flashlight is really helpful, like this Black Diamond headlamp or this camping lantern and flashlight combo.

Closed toe shoes are absolutely necessary. It was even colder after dark, and still raining occasionally.

A fantastic bonus we discovered was that with no light pollution, the night sky is unbelievable! Some in our group had never seen such layers upon layers of constellations!

There was a small crowd at the observation area, but we had no problem getting excellent views.

The river of lava was significant: much more dramatic than I was expecting!

Occasionally, the lava would burst with a spout of fire. The crowd would voice oohs and ahhs in response.

If you decide to try it with a DSLR, you will need to bring a tripod.

Set your ISO high, and use the bright spots to judge your exposure. If you use automatic settings, lower your exposure value by about one stop.

Remember, the lava is flowing like a river, so, even though it’s dark, use the fastest shutter speed possible.

I opted to travel light, just using my phone camera to capture the memory.

I could go on about all the other sights at Hawaii Volcanoes National Park, such as the petroglyphs, the lava tubes, and all the stunning hiking opportunities.

The point is, whether you have a lot of time or a little, you won’t want to miss your own adventure with the Hawaii volcanoes!

Nicole McKinney is a photographer, rare tea enthusiast, and nature lover. She lives with her husband in Eastern Kentucky. Follow Nicole at Tea on the Trail.