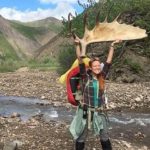 Are you planning to go backpacking in Denali National Park? We backpacked in Denali backcountry units 31 and 32 (Polychrome Mountain + Middle Toklat). Here’s how it went!

It’s very exciting planning a trip of this magnitude. For many of you, traveling to Alaska is a bucket list adventure of a lifetime!

However, I have been there and planned a trip myself, so I know that right along with the excitement is also a great amount of stress and nervousness.

Don’t worry! I am here to help you with my personal experiences!

I can help you choose backpacking gear for your trip! Check out my recommended gear for Denali National Park.

First off, it’s essential to know that Denali National Park is a trail-free park. That means there are no established trails or routes.

It keeps this park wild and full of adventure that, you the backpacker, get to choose your route for yourself.

So where do you go?

There are approximately six million acres of wilderness in Denali. Thankfully, the park service has divided that wilderness into 87 backcountry units.

That’s 87 units divided by 6 million acres. Do the math and it won’t take long to realize that those units are quite large!

Forty-one of the 87 units have restrictions on how many campers are allowed within the unit each night. It keeps the units from becoming overcrowded.

How to Choose Backcountry Units

When you arrive at Denali and apply for a backpacking permit, you’ll find out which units are still available during your trip.

During the summer the capacity fills up quickly, so do research ahead of time and have a few different itineraries written down. Know which units are (hopefully) a must-see for you.

The more you know about which units you prefer (and why), the better the ranger can help you get a permit for a route that you’ll love.

Which Units Are the Best (And Worst)?

This park is amazing, and all the backcountry units are wonderful in their own way.

However, I would recommend avoiding the units closest to the park entrance. They are mostly wooded and do not allow for as many epic views.

Look for backcountry units that have more open tundra. If you get to hike along a ridgetop in Denali, you will see miles and miles of incredible scenery!

We separated our five days in Denali into four units in two different sections of the park.

The first area we explored, Denali backcountry units 31 and 32, was not one of our first choices, but this area was definitely quite an adventure!

Our plan was to hike through units 31 and 32, and then head over to Denali backcountry units 12 and 13.

Unit 31 is the Polychrome area.

Polychrome is the name of the dominant peak in this area. You travel to the units by bus and the driver will stop where you will need to get out.

Learn more about the Denali bus (and backpacking bus tickets) in this park guide for Denali National Park.

The bus ride is a few hours long, so by the time you get to your unit, a big part of the day will be gone.

After the bus dropped us off, we hiked a relatively short distance up a small ridge, and then down into the small valley near a flowing stream.

This seems simple enough, but remember that since there are no trails, you have to bushwhack through ankle-to-knee-deep brush. This gets exhausting quickly so don’t expect to go nearly as far in a day as you would on a standard trail.

We dropped our packs, and then ate dinner near the stream. The water helped wash away any food debris we may have accidentally left behind.

My friend Carl decided it would be a good idea to hike up the nearest tall ridge without our packs to get a survey of the land to find our perfect camping site. We were looking for a camping site where we could spot a bear coming from as far as possible!

Nervous about grizzlies? Check out these tips for hiking in bear country.

On top of the ridge to our left was a level spot and a wonderful view of the backside of Polychrome mountain valley.

This is also where we spotted our first grizzly bear! He was looking for his dinner down in the valley below!

The next day we made our way down into the little valley. We skirted our way northwest around Polychrome towards unit 32, Middle Toklat.

The backside of Poylchrome is grueling! There are two deep gullies and one of them is horribly steep and treacherous.

Hiking to (and in) Unit 32: Middle Toklat

We followed a large creek for a while until we camped for the night.

This large creek would have taken us to the Toklat River to the far north. We decided to veer left and follow a small creek up and into the open areas northwest of Polychrome.

This was one of my favorite areas!

This open tundra nestled among small mountains had moose and reindeer trails that we followed easily.

We saw a reindeer high up on the ridge and a few moose throughout the day. Plus we saw a plethora of antlers too!

We eventually worked our way southwest until we went up a light ridge and came down onto another large creek.

Our goal was to reach the Toklat and skirt the east side until we reached the road, and then continue to our next set of backpacking units.

However, the risk you run by using a topographic map (a print out you buy from the permit desk) is that you cannot always read the terrain accurately.

The east bank turns into sheer cliff just before the road.

We had no choice but to ford the river.

It was a bad option, but it saved us a whole day backtracking.

It had been raining all day so we were already wet. The river was quite braided and only mid-thigh high so we took our chances.

I did actually get a photo of the river here, but while crossing the river my bag got soaked. That meant a lot of my gear got wet including my camera (RIP).

I recommend bringing along a lot of dry bags to keep your gear safe from water.

Even though the river wasn’t deep, the current was very strong. It’s likely you will get your feet swept out from under you and you will float or swim to the other side like we did.

Finally, we made it to the bus stop!

Wet and cold we got on the bus going back out of the park. We slept in our van and spent our fourth day washing and drying our clothes before coming back into the park for a final night.

Personally, I would not recommend the route we took only because of the river. Gorgeous as it was, it’s not worth missing a day drying out.

Jesse Smith was born in St Louis, MO and is a traveler, nomad, and creator. He has a mustache. Jesse is married to the most wonderful woman on the planet. They are learning Chinese and living the best life ever. Follow Jesse at @TheJesseSmithShow.