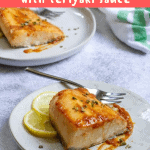 These baked yellowtail fillets are marinated in an easy homemade teriyaki sauce, baked until tender, and finished with a teriyaki glaze.

Ready for another foray into the world of slightly less common seafood?

Here at Champagne Tastes, we love exploring seafood beyond the typical grocery store offerings. We’ve had fun with recipes for salmon steaks, lingcod, sablefish, and more.

Yellowtail is one of those varieties of fish that pairs perfectly with a teriyaki glaze. In fact, if you want to use the teriyaki glaze with salmon, black cod, or salmon steaks, it will be delicious with any of them!

The yellowtail will be marinated before being baked and brushed with the teriyaki sauce. It’s ready in about 30 minutes!

What Kind of Fish is Yellowtail?

There’s more than one type of fish referred to as yellowtail, which can make things a little confusing when you’re looking for a recipe!

You might also see yellowtail snapper at your local fish market. If you’re looking for a snapper recipe, check out our recipe for pan-seared snapper instead.

Yellowtail is rich and meaty, with a flavor profile similar to tuna or swordfish.

It’s also often eaten raw in sushi, and would make a fabulous swap for tuna in these spicy tuna poke bowls.

In this recipe, however, we’re skipping the raw preparation and instead baking the yellowtail.

Where Can I Buy Yellowtail?

Yellowtail can be a little difficult to find.

I ordered mine from Misfits Market, but you could also check the freezer section at your most well-stocked grocery store.

How to Make Baked Yellowtail with Teriyaki Sauce

Start by making the teriyaki marinade.

Whisk together the vinegar, soy sauce, ginger, garlic, wasabi (or horseradish), and sugar.

Then place the marinade and the fish in a shallow dish, skin-side up.

Next, preheat the oven to 400 degrees Fahrenheit.

Take the fish out of the refrigerator. Brush off any excess marinade from the fillets, and place them in an oiled, oven-safe pan.

I like to use this Lodge 12″ carbon steel skillet.

Save the rest of the marinade for making sauce in a few minutes!

Slide the pan with the fish into the oven, and bake for 8 minutes per 1-inch of thickness.

Note that the bake time is a little shorter than most of my baked fish recipes, because it’s better to slightly undercook than overcook this fish. Also, yellowtail seems to cook through quickly!

When done, the fish will be opaque and easy to pierce with a fork.

While the fish is cooking, bring the rest of the marinade to a boil over medium heat in a small pot.

Then simmer the sauce for two or three minutes. You may need to lower the heat slightly.

Remove the pot from the heat and cover to keep warm.

When the yellowtail comes out of the oven, brush the teriyaki sauce over top of it, and serve immediately!

Extra sauce can be served on the side, or drizzled over side dishes like jasmine rice or roasted baby potatoes! 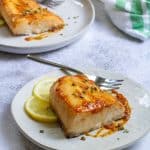