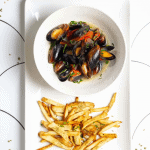 These delicious beer mussels are made with live or frozen mussels steamed in an easy beer and tomato broth. Serve with fries or warm toasted bread!

I really, really adore them.

The first time I tasted mussels was in a tiny Parisian café when I ordered Moules-frites (mussels and fries), and was somewhat startled when a truly massive bucket of mussels appeared at the table.

But guys, it was a happy surprise. The mussels were floating in an herb and white wine broth, and I happily dipped my fries in the soupy broth.

There were more than enough mussels to share with friends, and it was one of my absolute favorite meals ever.

Over the years, I’ve tried different types of mussels dishes, including a tasty mussels in curry sauce, but the French mussels in white wine sauce was always my absolute favorite.

Last year, though, I tried beer mussels at a Atlantic Brewing Company’s restaurant in Bar Harbor, Maine, and those mussels were phenomenal!

These beer mussels are inspired by that Bar Harbor brewery, and are simmered in a quick and easy beer broth.

How to Clean Live Mussels

Start by scrubbing them clean under cold water. Remove the beards (the stringy part).

Next, discard any mussels with broken shells. If any mussels are already popped open, try to gently close them. If they won’t close, discard those mussels.

Need more help? Check out this tutorial on how to clean mussels from Epicurious.

We’ve found that frozen mussels can be surprisingly delicious, and work wonderfully in this recipe.

Our favorite frozen mussels are organic mussels cooked in salt water (without any extra added sauces) from Pier 33 Gourmet. They’re sold at Costco, and (occasionally) Aldi. If you’re in the Cincinnati, Ohio area, I’ve also seen them at Jungle Jim’s.

Avoid using mussels packed in flavored sauces for this recipe.

Another great recipe for frozen (or fresh) mussels is this campfire shrimp boil.

Can I Use Canned Meat in This Beer Mussels Recipe?

We’re huge fans of canned fish, but this recipe just won’t be nearly the same with canned mussels.

If you’ve got canned mussels, try adding them to this easy clam chowder recipe instead.

How to Make Beer Mussels

Start by melting butter in a stockpot, and add onion and salt.

Cook until the onions soften, which may take 3 to 4 minutes.

Next, add the tomatoes and beer, and bring the mixture to a simmer.

Add the mussels and cover the pot to steam them.

Check the mussels to see if they’ve opened – it should take about 5 minutes if they’re live, or around 8 minutes if frozen.

Finally, add the chives and stir.

Serve the mussels right away. Scoop them into large bowls along with the beer broth. (Discard any that haven’t opened.)

I prefer to serve my mussels along with piping hot fries (such as these cripsy oven fries), but they’re also fantastic with warm, toasted bread, like this Dutch oven sourdough. 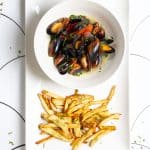 Serves 2 as a main course or 4 as an appetizer.  This recipe is easily doubled. Live mussel prep: Frozen mussels: Nutrition information does not include fries or toasted bread.